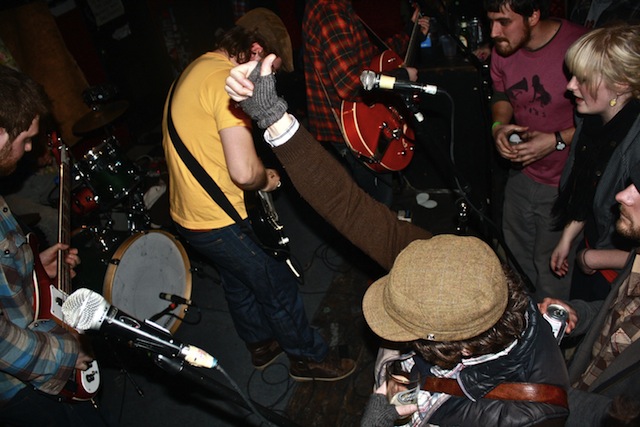 I hauled ass through an ice-coated Albany and walked into the dimly lit music bar just in time to catch the catchy ear worm cover of Neutral Milk Hotel’s “In the Aeroplane Over the Sea.” I arrived as their set was concluding and saw that the band playing, Neighborhood of Make Believe, spawned from members of Sgt Dunbar and the b3nson fam. With a “WCDB” banner and an aged yellow andÂ green floral sheet as backdrops to the stage, it was pleasantly fitting that the bar, for the most part, was loosely packed with friends, familiar faces and friendly strangers alike.

As Barons in the Attic started setting up, people already were dancing and yelping. Barons, a part of the B3nson crew, is a local 5-piece known for their monstrous instrumentation and explosion of sound, in addition to occasionally hosting awesome basement shows. They blend in acoustic folk accents to their sound but Iâ€™d personally consider them more of an alternate rock band. Barons is all about getting their music out there (as all musicians are) but thereâ€™s an authenticity behind their networking efforts that really works for them. They make it clear that they are just as serious about their music as they about people enjoying themselves, which translates into a guaranteed fun live show. In addition to individually being musically gifted, Baronsâ€™ likes to mix it up â€” pretty much swapping instruments every other song in a musical chairs type fashion. Playing some crowd favorites, such as â€œBlue York Cityâ€ “Song 3.0″ and â€œWintery Mix,â€ resulted in vocal support from more than a handful of show goers. Barons also threw in some new songs into the mix, all with a spontaneous nature of basically scrapping their set list due to pressing time constraints. They concluded with â€œMy Old Soul,” merrily paving the way to Colour Revoltâ€™s Albany debut.

Colour Revolt is adaptive and interactive. At one point, Sean Kirkpatrick (vocals/guitar) took advice from Prima‘s Collin Reynolds in asking to adjust the volume on the vocals. The bassist, Luke White, halfway through their set, handed photographer Patrick Dodson a winning scratch-off for $5 in exchange for a beer. After the show, inching closer to 1am, all the bands hung out at the bar and sparked cas ual conversation with the other bands and some late-night lingerers alike. They have the professionalism of seasoned pro’s while still maintaining a relatable DIY polish. Overall, the type of bands that do their thing regardless of the venue or turn-out, are always the ones that make an impression on me. Â Thankfully, Valentine’s played host to an eclectic batch of bands that all fit that category.