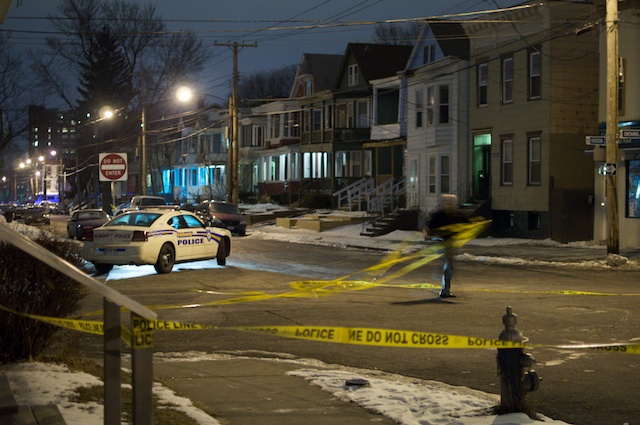 [tweetmeme]On September 17, 2010 a report was filed to the Albany Police Department by a University student alleging that a revolver had been pointed at him in an attempted robbery. Earlier that month, a string of break-ins took place involving sexual harassment, weapon-wielding, and college-age females. Unfortunately, for those of us who have come to call the â€œCollege Ghettoâ€ our home, these are not the only instances of criminal activity that have come to affect us. Headlines like â€œFour New Robberies or Attempts within Two Hoursâ€ and â€œThree Face Charges in Albany Beatingâ€ have become commonplace as my group of friends can count on their hands the number of people they know who have not been mugged. Even my freshman orientation at the College of Saint Rose in August of 2005 coincided with a hostage situation at a bank just a few blocks from campus. All this without even mentioning the botched robbery turned murder of Richard Bailey, the death of Joshua Szostak, tied by some to the â€œSmiley Faceâ€ serial killings, and SUNY Albany alumnus turned â€œCraigslist Killer,â€ Philip Markoff. Clearly Albany has a crime problem, but the questions remain: â€œIs it getting worse?â€ and â€œWhat is its cause?â€

So far, just a month into the fall semester, Albany Police have been holding up one of the most important jobs of law enforcement according to Criminologists: making their presence known. Dodge Chargers guard the pavement while mounted policemen sully it; a 30 foot guard-tower guards the intersection of Ontario and Madison while bike cops pick up sunbathers in Washington Park; spotlights illuminate Hudson Avenue while electronic signs remind pedestrians of the ubiquity of police presence in the area. Donâ€™t get me wrong, we know youâ€™re here every time we play a record too loud or have a few too many rowdy friends over and you march through our front doors or into our backyards with flashlights flashing and power-trips tripping. But does this help create a tangible, not illusory, sense of safety and security? Is this how a community is protected and served?

As a child of the 90s and 2000s, growing up in the hustle and bustle of white, middle-class suburbia, amongst absent fathers who cheat on their wives with their 9 to 5s, PTA mothers who work, transport, clean, plan, and cook, and stoic children pacified by extra-curriculars and Nickelodeon, one of the only places the family could sit and talk as a family was at the dinner table. Over quarter pound burgers, noodley casseroles, and Kraft macaroni and cheese, my parents and three boys glossed over sporting events, academic trivialities, love lost and gained, and the difficulties of growing old. But sometimes, however occasional, conversations settled upon more worldly concerns: racism and race relations in the urban school I attended (before my brothers were shipped off to private school), war and increasing militarism (especially after 9-11), religious zealotry and faith (â€œeverything in moderationâ€), and even sexuality. From these conversations I learned the golden rule of familial relations: â€œNever talk religion or politics with your family and friends.â€

Generally this warning was heeded, as my political consciousness wasnâ€™t nearly developed until I moved to Albany for college. In the familyâ€™s view everyone had opinions, and children were to be seen and not heard. That is until Obama ran for president, until perceptions of race among American whites were openly challenged for the first time in decades, until â€œliberalsâ€ were gaining political power with expediency and â€œsocialistsâ€ were tainting governmental policy. This is when my father brought forth a pearl of wisdom that speaks volumes of his own views on poverty, law enforcement, and governance, â€œOther than investing money in law enforcement, what more can a mayor do to combat a cityâ€™s crime?â€

Instead of spending the money on fancy new toys, the police department could start training their officers in how to deal with college-age kids, or even in how to overcome feelings of racism, sexism, and hyper-aggression. The city could actually start addressing the poverty on its streets rather than simply having officers redirect the homeless away from areas of high socio-economic status. Perhaps the missions and shelters downtown could take inhabitants on for longer than a few weeks, especially during the winter months when the streets are frigid and unforgiving. An ordinance was just passed to keep on-street businesses from having to take in their tables and chairs before midnight on the presumption that keeping business open later would strengthen the economy, encourage more foot traffic on Lark Street, and thereby prevent crime. As bars on Lark donâ€™t close until 3 am or later, whatâ€™s the harm in extending that law further? Maybe instead of breaking up the more harmless college parties, patrolmen could start writing tickets for littering. Although I canâ€™t claim full responsibility for this stream of thought, the idea is that by ticketing wasteful pizza eaters, crimson cup drinkers, and Chinese food patrons the city might also write more open container tickets. Much like Guilianiâ€™s crackdown on â€œSqueegee Menâ€ in New York City during the 1990s that indirectly discouraged â€œmore serious crimes,â€ Albany could dully combat underage drinking and garbage accumulation, while making the city a penny or two. As outspoken critics like to so loudly remind our President, it is not how much money you throw behind a project but how the project is undertaken that makes it successful.

Iâ€™d like to be proud of the people who claim to protect me. I want to see someone in uniform and feel, no, believe that he or she is serving their community to the best of their ability. I want to be able to call 911 and know that my inquiry will be taken seriously, as a genuine call of distress not as an imposition, whatever that phone call may be. How can I do this when an Albany police officer is in the paper for lewd conduct during a search? How can I do this when vocal critics of police performance are manhandled during party breakups despite never resisting arrest or laying hands on an officer? How can I when more APD are on their cell phones, misusing their sirens, or disobeying the rules of the road than are fighting crime by the book? How can I when racism and sexism leave a scar on the face of justice in the very capital city from which it should emanate?