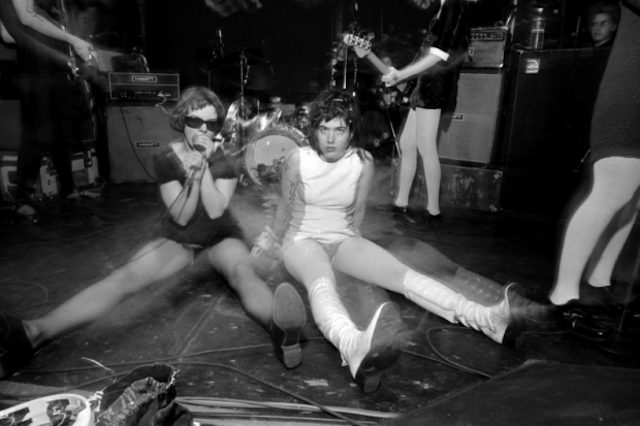 Dischord Records commemorated the occasion on its website; Ian MacKaye produced the record and was an early fan of the band. Coincidentally, in a Nov. 20 interview with The A.V. Clubâ€™s Marah Eakin, Kathleen Hanna compared herself to a â€œfemale Ian MacKaye, but with fewer morals.â€ Spin ran an entertaining oral history of the bandâ€™s first years. (Best part: Justin Trosper of Unwoundâ€™s anecdote about flunking high-school English after bringing Kathleen Hanna to speak to his class.)

All the requisite fanfare for a big-deal reissue, in other words. And as far as rock music goes, Bikini Kill is undoubtedly an important record. It provided inspiration to thousands of listeners; it rightly made a lot of detractors very uncomfortable, particularly in hardcore. Even in the late 1990s, an era hardcore fans remember for political correctnessâ€”in both the Old Left and Fox News senses of the termâ€”run amok, columnists admitted or confessed to liking Bikini Kill in such right-on zines as HeartattaCk and Maximumrocknroll. It ushered in new discussions about gender politics, sexism, and sexuality in rockâ€”punk and â€œalternativeâ€ rock especially, which so often believed themselves to be beyond criticism in that regard. It was confrontational. It was direct. In a very real sense, it had not been done before.

Yes, truly a groundbreaking release. What gets overlooked, though, in Bikini Killâ€™s historical significance, is the music itself. And letâ€™s be real: the music isnâ€™t there yet.