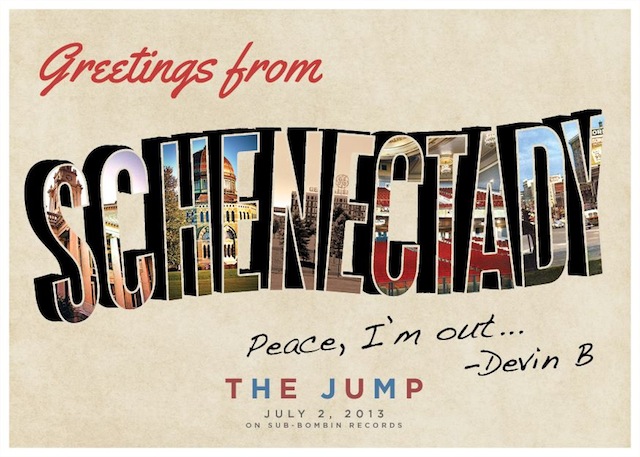 When Sub-Bombin Records released teaser single “Paperweight” from Devin B‘s forthcoming release “The Jump” back in May, I would rock the 3 edition package (track, instrumental, acapella) on repeat, on the daily. It’s so damn good. An anthem for the underpaid and overworked.

“The Jump” is the first full-length effort from Devin B and is currently available for pre-order via Sub-Bombin Records. When you pre-order the album, which is out July 2, you’ll also receive a limited edition beer coozie while supplies last. Sub-Bombin does it different and does it right.

Releasing one track in multiple ways makes it easy for the listener to focus on the level a producer or a lyricist would, in addition to a typical listening experience. Breaking a song down to its parts is appealing because separating the elements helps you to appreciate the song as a whole effort, or at least be reminded of the layered components of a composition. Sometimes I wish that every release came with a bonus instrumental version but maybe since that’s not quite the norm, I appreciate it even more when it happens that way.

Perhaps due to my early exposure to it, “Paperweight” has easily become my favorite track on the album. As a track released in advance for the record, “Paperweight” was a perfect hook, line and sinker for building anticipation of the full album. As was catching Devin B perform prior to even knowing he had an album in the works.

When I first heard Devin B perform a live set down at McGeary’s months back, I remember thinking to myself that I was impressed he remembered all these words with flawless ease. From my memory, it seemed like he barely paused to breathe while maintaining a calm, cool and collected demeanor during his performance. Now all this may seem silly, as it IS a key part of being a rapper to remember verses, but as someone who can’t remember what they ate for breakfast yesterday let alone intricate rhyming patterns, I was throughly impressed at the capacity of the songs Devin B performed. It seemed as though his flow didn’t hiccup once and his distinctive flow has translated onto his new album wonderfully. His vocal delivery is spitfire by nature but conversational, while also laid back and smooth. It’s refreshing and not overwhelming.

“The Jump” features a bakers dozen of tracks produced by Odisbey, Mitochi and Lo Ki, with a bonus remix by Dood Computer featuring elsphinx and JB aka Dirty Moses joining on for track “Boeing Somewhere.” These producers were meant to work with Dev B and Dev B was meant to work with these producers. Mutually beneficial music pairings are a beautiful thing. When you find something that works for you, run with it.

If this is your first introduction to Devin B – which may be likely as this is his debut full length – it’s a safe understatement to say he leaves a great first impression. I think Devin B is lucky to have found his voice early on in the game, all while polishing his verses with the execution of a veteran MC.

This album, as a whole, doesn’t remind me of other releases I’ve heard in recent months and in general, in both the mainstream and underground circles. It’s quirky but stands its own ground. Fans of indie rock, electronic and hip hop can all enjoy this one, it’s not just for one intended audience.

Fresh, fly and for the summer months.

KAB picks: “Paperweight,” “Down,” “Collision,” “The Flipside” and “Boeing Somewhere.”