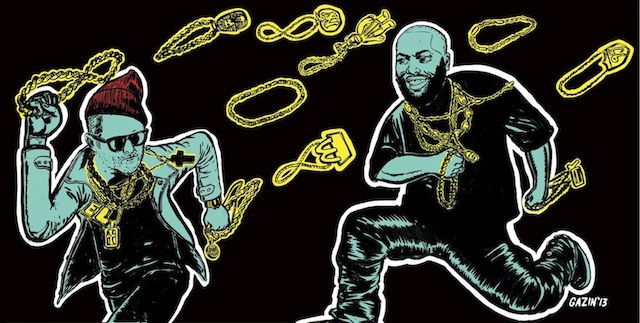 A lot can happen when certain elemental forces collide together to concoct something entirely unexpected. Some collisions may cause setbacks (Loutallica?), while others create great sonic experiences. The latter applies to the duo of El-P and Killer Mike, two of the most explosive and relevant forces in hip-hop over the last 15 years.

On paper, it may not seem practical for these two to work together. El-P, co-founder and visionary of 90â€™s underground hip-hop act Company Flow, is usually seen as being more suited for individuals looking for that East Coast underground feel. Killer Mike, who has been featured on several OutKast tracks, is known for his in-your-face, no-holds-barred attitude and southern swagger. Good thing these two individuals do not care about practicality, due to the fact that over the past year, they both contributed to each others solo projects, garnering a huge amount of acclaim. Now, the fans have received Run the Jewels, the official group effort of El-P and Killer Mike. Yes, this self-titled debut from the collective is a short one, but it serves its purpose very well.

If you liked last yearâ€™s Cancer 4 Cure, as well as R.A.P Music, Run the Jewels does not stray far from the same territory that those albums wrought. From the opening track, El-P and Killer Mike trade off verses, allowing them both to shine, while the production constantly punches you in the face. The usual paranoia-tinged production that El-P cooks up on his other releases is still here, just with more of a party vibe. I could honestly see some of these songs getting played in a club (not in heavy rotation, but still played nonetheless).

Both MCs present brash and braggadocios lyrics (i.e. â€œTryna get some hoes in a hot car”), although I do believe these lyrics act in more of a cartoony-context rather than a â€œrealistic” one. The album does lack topical tracks, which is a bit of a downer. This could be forgiven though, due to the fact that the album is so well constructed in such a short amount of time.

I believe that this album serves as a reminder of the force of these two hip-hop juggernauts, two talents that have a wide appeal, yet take no BS.

Next ArticleCapital City Gastropub getting renovations under new owners