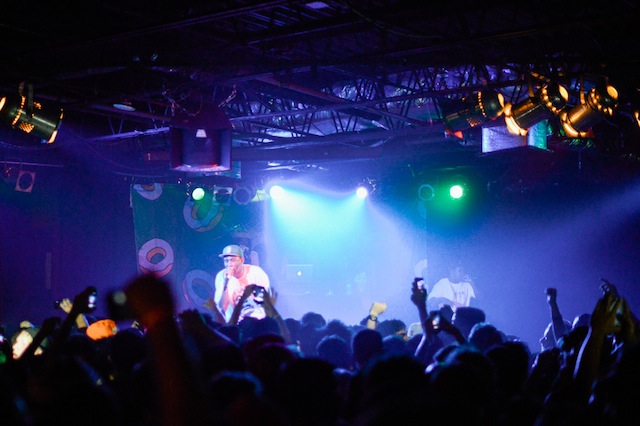 Last night, Andrew and I checked out the Odd Future show at Upstate Concert Hall. Upon arriving just after the show started, I couldn’t quite gauge if we missed an opener or not. It appeared like we didn’t miss much and before long, I could see Tyler the Creator and crew on stage, through a sweating sea of people.

The venue was hot. Almost to the point where it was unbearable. I personally chose to stand back next to the bar where it was barely cooler and therefore was unable to see what was really going on up on stage. Normally, this wouldn’t be a big deal but the sound was simply not good for this show. Not sure if it was a hiccup, or if there were a couple things off, but I could barely hear the vocals over the bass at times, and at times, could hear the beats but was unable to make out clear vocals. UCH, in my opinion, usually does pretty well for sound, but this show missed the mark.

Between the unbalanced sound and absolutely crazy (and young) crowd, it was hard to focus on the performance itself. It felt as if songs were executed in short bursts and cut off early to make way for banter I couldn’t quite make out. My notes attempting to compile a set list fell short, with “Cowboy” and “IFHY” making my cut. Last night was one of those times where I self-loathed temporarily for feeling detached from an energetic crowd I’d like to have been apart of but it was just a bit overwhelming to enjoy with such a swarming audience. With security pouring water bottles on the crowd for quick relief from the body heat and sweat, I couldn’t help but think I’d have enjoyed the show much more if it was at an outdoor festival.

Odd Future is known for its crazy live show and for many in attendance, this show was no exception to that reputation. For me, it was unmemorable and scattered, and I’d much prefer to listen to their recorded music and mix tapes. The eclectic members of Odd Future make for an acquired taste that isn’t for everyone, and while I am not a diehard fan, if I was, I’d also likely have walked away from this show a bit disappointed.

Be sure to check out UCH’s site for their batch of upcoming shows.