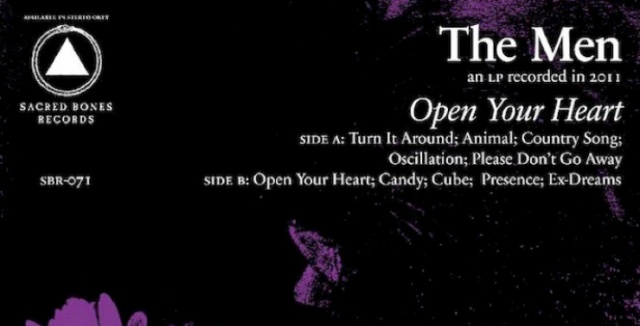 So, wait â€“ everyoneâ€™s fine with this?

Brooklynâ€™s the Men have been attracting some media attention lately. Not internet attention â€“ the real kind; the square kind. The New York Times kind: in a write-up of their March 7 Williamsburg loft show, reporter Ben Ratliff vacillates between lauding the Men and disparaging them, although in the end he opts for the former. To Ratliff, they donâ€™t stand up to close analysis. â€œYou can wonder why the men in the Men donâ€™t want to be better: better singers, better players, better riff writers,â€ he writes. â€œReduce this band to its parts, and all the charm drains out of it.â€ Elsewhere, he notes that their songs â€œrun beyond their natural length and just keep goingâ€ and describes their performance as â€œslovenly.â€

Ultimately, Ratliff praises the Men, but his praise is faint praise â€“ that stuff of damnation â€“ laced with â€¦ well, if not actual disappointment, then bafflement, the confusion of an outsider who peeks into a subculture and canâ€™t for the life of him figure out what all the fuss is about. And Ratliff understands exactly what the Men are doing when he dissects their style: â€œSometimes a riff is just a riff, but played a certain way at a certain speed, itâ€™s a reference, and thereâ€™s a pointed power in a reference, a kind of self-identification.â€ Those references are plumage, peacock feathers. They signify the bandâ€™s position as curators of cultural knowledge. They advertise that the Men deserve to be onstage, deserve to put out records, deserve attention from critics.

Ratliff gets what theyâ€™re up to. The Men get it, too. Theyâ€™ve completely absorbed Jon Cusackâ€™s line from High Fidelity that people should be defined by their tastes. As artists, nothing could hurt them more.

In my review of Cloud Nothingsâ€™ Attack on Memory, I harp on the oft-repeated notion that â€œtalent borrows, genius steals.â€ Much of that recordâ€™s charm, I argue, stems from band audibly swiping whole sections from the Wipersâ€™ Youth of America and then bending those stolen elements into their own. The Menâ€™s Open Your Heart represents the flipside of that equation. My first impression was that of a music studentâ€™s third-year final project. A second listen does nothing to change that â€“ not good for a band on their third LP. Hereâ€™s our Neu! song (â€œOscillationâ€). Hereâ€™s our Stooges song (â€œAnimalâ€). Hereâ€™s our Crosby, Stills & Nash song (â€œCandyâ€). Hereâ€™s our My Bloody Valentine song (â€œPlease Donâ€™t Go Awayâ€). Did we miss anything on the syllabus?

The Men donâ€™t steal. They borrow, as if Klaus Dinger or Ron Asheton or David Crosby or Kevin Shields will be back in a week to pick their tunes up. They rent, daring not to alter their sources too much lest their landlord withholds their security deposit. They flit from style to style but commit to none, adding nothing beyond a mantle of distortion in a slapdash attempt to unify the proceedings. While the album plays, I hear what theyâ€™re attempting on Open Your Heart; once it ends, I remember almost none of it, since it was never theirs to begin with. Open Your Heart sounds like everything; Open Your Heart sounds like nothing.

No. Hold on. Open Your Heart sounds like exactly what it is: the product of basement-show punk kids tired of the genreâ€™s restrictions, who donâ€™t know where to turn next. So they play musical dress-up. Therein lies the Menâ€™s problem: they may be the most well-read hardcore band at the show, but theyâ€™re a hardcore band nonetheless. Fittingly, the two tracks on Open Your Heart that bear any trace of uniqueness â€“ opener â€œTurn It Aroundâ€ and â€œCube,â€ the shortest track at under two-and-a-half minutes â€“ stick the closest to the template of crashing drums and overpowering distortion. By themselves, theyâ€™re not especially memorable; in context, they illuminate the fact that while the Men may have expanded their musical vocabulary beyond the all-ages scene, they havenâ€™t escaped the subcultureâ€™s methodology.

Hardcore prizes familiarity and authenticity above innovation and creativity. To an extent, all music does this: notoriety rides upon waves of hype, of me-too bands and made-up genres and professionally-generated publicity. But hardcore leans upon herd mentality more than most. Bands vie both live and on record to hit all the requisite subcultural markers that denote their realness and prove their rightful place in the hardcore canon. (Witness how crowds ignore bands until they announce theyâ€™re playing a cover.) Fans decry musicians who look past the sceneâ€™s well-demarcated borders, tossing around the term â€œselloutâ€ as if it held any relevance in 2012 â€“ or, for that matter, as if selling out were legitimately still possible. In its 1980s heyday, hardcore at its best provided a springboard for musical exploration; today, itâ€™s a bastion of conservatism, where artistic and social constriction march hand-in-hand.

For all their attempts to escape their sceneâ€™s gravity, the Men never really break orbit. They keep returning to their hardcore ways, like a self-professed retired criminal lured back time and again by the false promise of one last big job. In a way, their half-hearted stabs at flouting hardcore tradition fall directly in line with it: how many old hardcore seven-inches included token exercises in reggae or funk or postpunk meant to silence reviewersâ€™ accusations of one-dimensionality? Answer: tons. Open Your Heart just extends that idea to album length, and to its credit pulls it off better than most. But simply completing an exercise well doesnâ€™t transform it into something more.

Hereâ€™s where the critics come in. Make no mistake, the Men are no household name â€“ theyâ€™re a bloggersâ€™ band, well beneath the notice of Entertainment Weekly or Newsweek and not quite big enough to register at Spin. (For that matter, their coverage in the Times reflects more on their ZIP code than their LP sales.) But the Men aim past the realm of punk zines, towards bigger-name indie publications; in that world, much of the response has been positive. Pitchforkâ€™s Ian Cohen awarded Open Your Heart an 8.5 in a March 5 review, making it a shoo-in for the websiteâ€™s Best of 2012 list. The next day, Jason Heller of The A.V. Club gave it an A.

Conversely, Vice magazineâ€™s Anthony Pappalardo found Open Your Heart dull, a pastiche of influences already beaten to death by other bands; like Ratliff, he also thought the songs were too long. (Theyâ€™re both correct â€“ the Men consistently pad each track by a minute or two.) Notably, though, Pappalardoâ€™s dismissal of Open Your Heart says much the same thing as Hellerâ€™s endorsement. Both reviewers point out the title trackâ€™s similarity to the Buzzcocksâ€™ â€œEver Fallen in Loveâ€; both claim that the album opens with the main riff from â€œSuspect Deviceâ€ by Stiff Little Fingers. (I donâ€™t hear it.)

Heller hears a â€œparty album.â€ Cohen echoes him, asserting that â€œit’s difficult to remember a rock record that managed to be this much fun without resorting to cheerleadingâ€ and likening Open Your Heart to â€œa masterful DJ mix.â€ Where they hear celebration, Papallardo detects cynicism: â€œIs the album good? I donâ€™t really care,â€ he scoffs. To him, the Men have merely â€œmade an album that references whatever the fucking lazy retired human listening thinks is â€˜rock music.â€™â€ No reviewer, however, pretends that the Men stand alone on their own merit; all three produce encyclopedia entries, references, Sparknotes for the listener at home.

Iâ€™ve done the same. Itâ€™s impossible to avoid with an album that refuses at every turn to synthesize its component influences into any sort of coherent whole. The Menâ€™s music rewards knowledge, validates the listener (or reviewer) for â€œgetting it,â€ but it never becomes its own thing. Itâ€™s a soundtrack for a subculture in flux. A fan and a detractor differ only in that a fan will insist that it doesnâ€™t matter, while a detractor will counter that it does. In the end, laziness overwhelms Open Your Heart â€“ the laziness of the student who mistakes a vast bibliography for original thought.

Ratliff picks up on this â€“ their sloppiness, their apparent disdain for their chosen craft â€“ and pulls it apart for five paragraphs before abruptly deciding that while the Menâ€™s music isnâ€™t good, itâ€™s good enough. â€œBut somehow this doesnâ€™t feel like an urgent game with the Men,â€ he concludes. â€œMaybe they donâ€™t care, or want very much to appear not to care. Maybe thatâ€™s all right.â€ But itâ€™s not. In art, â€œgoodâ€ is not the same thing as â€œgood enough.â€ If the Men presented themselves as a hardcore band, Open Your Heart would still fail to impress me, but I might applaud them for introducing some color to a genre that paints in two shades of grey. Any effort to stand out looks monumental next to total apathy. But the Men donâ€™t want to play hardcore, and outside of hardcore the standards are higher. Or should be, at least.

I donâ€™t dismiss the Men for being unoriginal or for wearing their influences on their flannel and denim sleeves. Art cannibalizes art constantly; no piece of art springs fully formed, Minerva-like, from its creatorâ€™s head. No, I dismiss the Men because Open Your Heart satisfies itself with being no more than a game of Trivial Pursuit: fun the first time, less fun the second, a sleeping aid once youâ€™ve memorized enough of the answers. Demand more from art.

Open Your Heart was released March 6, 2012. Available on LP and CD from www.sacredbonesrecords.com.

The traditional image of an artist: someone who is willing to put themselves through an emotional, mental, and/or physical gauntlet in the pursuit of creative expression. In order to create, one must be isolated from the world and be willing to delve into their own soul, extracting whatever is needed for said expression. There have…

EMPAC has another awesome electronic music show on the horizon. Oneohtrix Point Never is set to perform on Friday, October 16 and EMPAC has been kind enough to offer a pair of tickets to give away. Enter below! From the event page: Lopatin is known for creating intricate electronic music that is characterized by its… 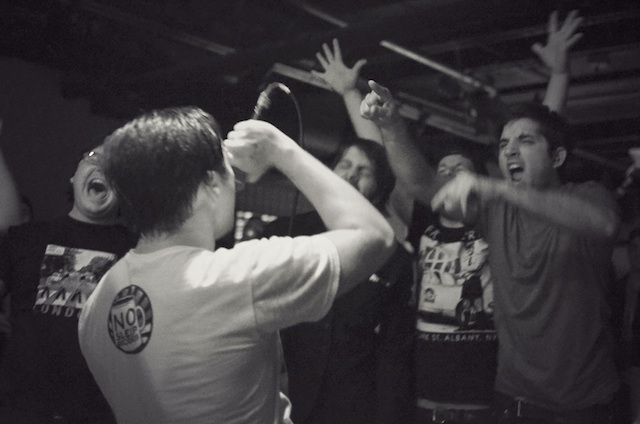 Last night was the release show for the Caleb Lionheart/After The Fall split 7″. There were a lot of familiar faces in attendance as well as a good turn out, which was exactly what I had expected. I unfortunately missed the opening bands but made it to Valentine’s in time to catch the last four…

On May 17th, The Palace is going to host an amazing Old-School Hip-Hop show featuring Big Daddy Kane, MC Lyte & Doug E. Fresh. This is a left-field booking for this vastly underused venue, so I hope this is indication of what’s to come for the Palace in 2013. I’ve been crossing my fingers on…

Last night kicked off the world premiere of Hyper-Rainforest, a sound projection and sonic stimulation created from unmodified sound bites captured directly from rainforests all over the continents.Â  The piece was developed in residence at (and commissioned by) the Experimental Media And Performing Arts Center over in Troy, a.k.a. literally the coolest building bordering Albany…