No one goes to see the Bearded Lady looking for substance. Seeing Mindless Self Indulgence this past Friday was an example of just that: spectacle. It isn’t important to justify or feel as though you have to defend being drawn into the element of performance; sometimes you just are. (Unless of course, that spectacle is Skrillex, in which case I don’t have much to say to you that you already haven’t heard before). 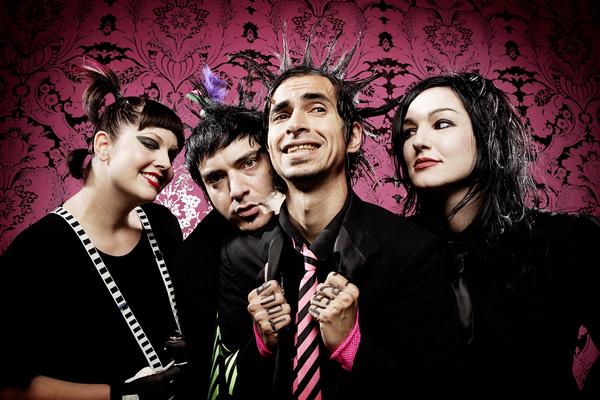 Mindless Self Indulgence are no strangers to the world of live performances, forming back in 1997. Wearing studded pink underwear over skin tight jeans, a leather jacket with the MSI logo on the back and a bowtie, frontman Jimmy Urine was the polar opposite of a shy performer. In fact, you could even go as far as to say that Jimmy Urine is the Bearded Lady ringleader of their eclectic mash-up sound drawing from punk, electronica and hip-hop influences, riling up the inner freak in all of us with the weirdest in-between-song-banter I think I’ve ever heard.

Be sure to check out Step Up Presents to see what’s coming up and hit the jump to see how weird things got.

Prior to their set, Morningwood played a set that made me wish it was 2006 when I was moderately obsessed with their self-titled album. Lead singer Chantal Claret is indubitably a total babe and has a set of pipes to match. They powered through everything I wanted to hear including their most popular single, “Nth Degree” and “Jetsetter” and “New York Girls.” During “Nth Degree” Claret’s hypnotic voice won over the crowd, asking attendees to crouch down low in a spontaneous build up of energy and excitement, created by chanting the spelling of the bands name at low volumes to high. I’d have been satisfied leaving after their set, but I wanted to see things get weird. Whichâ€¦ needless to say, they did.

Not only does MSI have a reputation of being masters of creative obnoxiousness, but they certainly lived up to it live. Phrases like “Hit me with that beat like Chris Brown hit Rihanna”, “I’m not that gay but you are!”, “I’m mad as hell cuz you guys stole my style” and “Dungeons and Dragons never got me laid – you guys have it made these days” are part of what gives Jimmy Urine his mysterious appeal as a totally confident weirdo with a microphone.

He also struck up a conversation regarding dustup and how the genre has become over-saturated and is beginning to be more popular in mainstream music, as we’ve been seeing the past year or two. My favorite quote from what could be interpreted as a bitter rant for not getting recognized as a dubstep-inspired trendsetter was that “no matter what, when people don’t ‘get’ what you are doing – tell them you are just 10 years ahead of your time.” And noting what Korn has been up to these days (shudder) I’d say Mindless Self Indulgence actually was 10 years ahead of their time and the world might be a little bit more ready for them now.

Unfortunately, I’d rather have a conversation with him then hear his band strike another chord, but that’s just me. Like I said, this one was about the performance. Some other memorable moments are when he started a seance for Whitney Houston, jumping all around the stage with ADHD that matched their music and asking the following “With over a million rappers in the world but not one of them gay, how is that even possible? One of them must be lying”. (I’ve never really thought about that before). He also talked about Pokemon (playing the theme song for Team Rocketâ€¦wow), the afterlife and how people don’t get as excited for education art and agriculture as they do for drugs, booze and sex.

Musically, I didn’t recognize much aside from “1989” “Prescription” and “Shut Me Up” and the instrumental star spangled banner they played prior to entering the stage. If I was to wage a bet, I’d say a good amount of the people in the audience (also note – this show was packed to the brim) must have been fans in high school. That’s when I first heard them play. There’s always something about bands that have been touring for a decade that makes someone feel a bit nostalgic. And in my case, twizzy. My freak flag won’t be flying anytime soon though, I think after this past Friday, I’m set.

Sometimes, though, why not.

Friday is the next OUTPOST1 party in our monthly residence at Fuze Box! We’re super pumped to be having DJ MikeQ from NJ coming up to show us what’s good in today’s ballroom/vogue sound. To get you all ready for the dubstep portion of our parties, I took it upon myself to make a PTW…

EMPAC has an awesome last minute addition to their already awesome Fall schedule. Oneohtrix Point Never will be playing EMPAC October 16 at 8PM. When Oneohtrix Point Never (aka electronic musician Daniel Lopatin) was last at EMPAC, he and visual artist Nate Boyce developed and debuted a multimedia stage show for the world tour supporting…

Updated: EQX has announced earlier today that in addition to Matt and Kim, locals Phantogram will be joining the festival, as well as the recently re-formed Conehead Buddha. Pearl Palooza, downtown Albany’s response to Lark Fest, has just announced their lineup for their block party, which is Saturday September 22nd of this year. The main…

Returning back to Albany after a couple of out-of-town shows alongside Braid and Owen this past weekend, Aficionado has announced the release date for their next 7″. “Empty” will be released on September 25th on No Sleep Records and will feature a track of the same name with “The Slack” on the B-side. Filter Magazine…