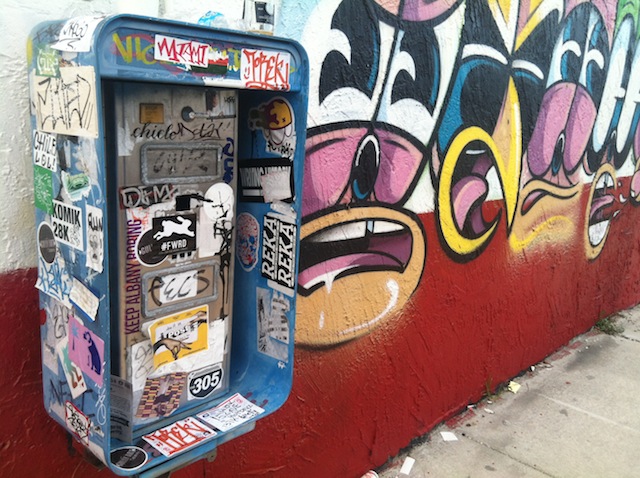 This year’s annual Art Basel affair fell on December 6-9 and just about a week prior, I decided to book a spontaneous flight to Miami to check it out for myself. (Do something stupid like that sometime, it feels amazing).

Essentially, Art Basel has grown massively since getting its start in 1970 and now has expanded to include an incomprehensibly huge amount of representative galleries, artists and of course, copious amounts of artwork itself, all contained in one place, at one time. Simply put, Art Basel is reputed to be the most prestigious art show in the country and features galleries from all over the world. What I learned during my trip is that Art Basel is the jump off for almost a dozen other giant art fairs that are all organized during the same time frame, all hosted in Miami.

Our game plan was solely to solidify our booking at a $18-per-night hostel in South Beach and take it from there. We ended up overdosing on art in the best way imaginable during our time in Miami.

We hit up separate fairs, Fountain, (which featured work from local artists, including Samson Contompasis and friends of ours who run a gallery in North Adams), Scope, Pulse and another one focused mainly on fine art that was free admission. It was nice to get some contrast between fairs, as most had a subtle DIY pop-up gallery feel (some with live painting occurring at all hours outside its walls) and all featured top tier artists of today’s scene and countless others of impeccable talent and creativity.

The Wynwood Arts District was absolutely the highlight and focal point of the weekend, with art by day and countless parties at night, with so many people walking around cars had a hard time moving down the street. Walking down one street one day had a completely different feel the next, as new murals popped up on walls literally overnight. There was also a shift in energy from Wynwood during the day into the art district’s night life mode that helped remind us that we were on vacation in the first place and artists, well, they like to have their fun as well. SPIN Magazine sponsored one of the parties we went to and we saw araabMUZIK, Mr. MFN eXquire, Kool Keith perform under an artfully constructed stage. Other performers throughout the weekend included MikeQ (who we unfortunately missed), Ben UFO and JOGYO, featuring kuxxan SUUM.

Art-wise, it was a happy challenge attempting to see it all (this is virtually impossible) and although we probably only hit 30% of what was fully offered as a part of the festivities, it was more than satisfying and by the end of the weekend, we were ready to not look at art anymore. Additionally, it was hard to NOT take pictures the entire time, as the level of artistic quality and quantity were both at all time highs. I’ve never experienced anything quite like it in any comparable capacity and now that I’ve gone this year, it feels like a staple for next December as well.

Plus you know, seeing palm trees everywhere and experiencing warm weather in December is always nice. And I had a fried-avocado taco that changed my life.

Hit the jump or click on the image above to see the full gallery.

Next ArticleAndrew's Music Monday: On The Sly Edition