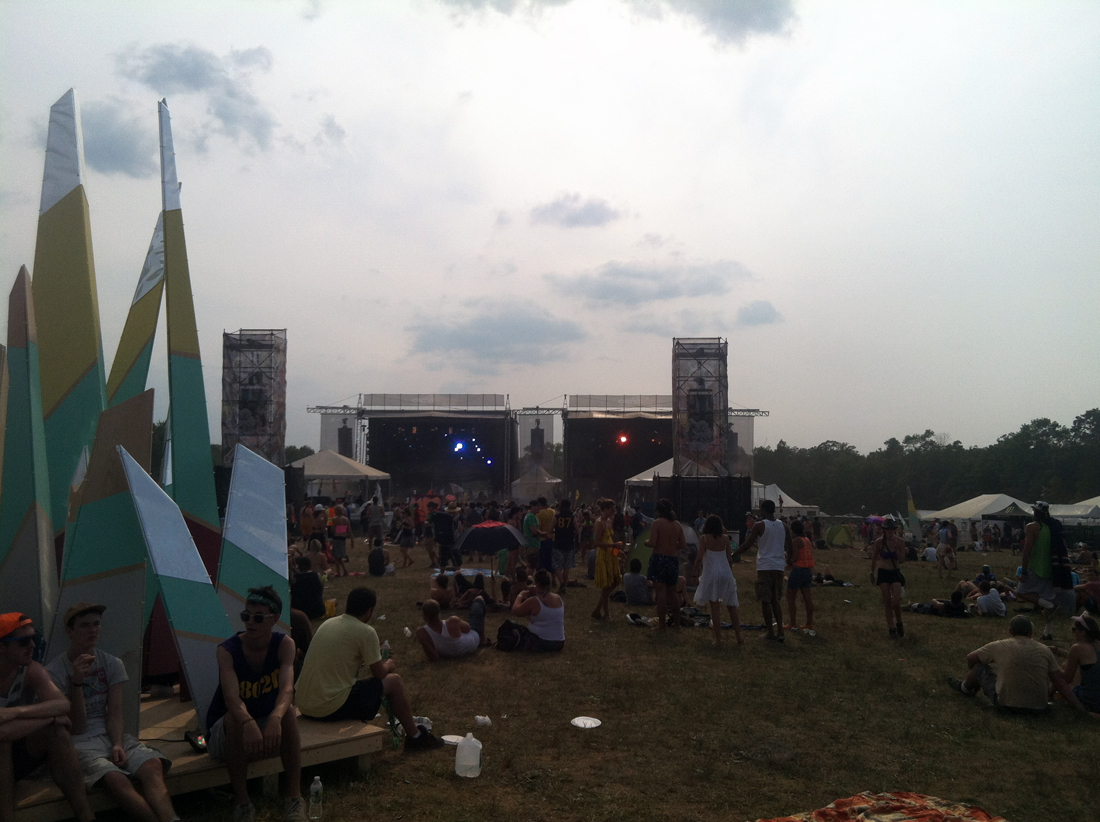 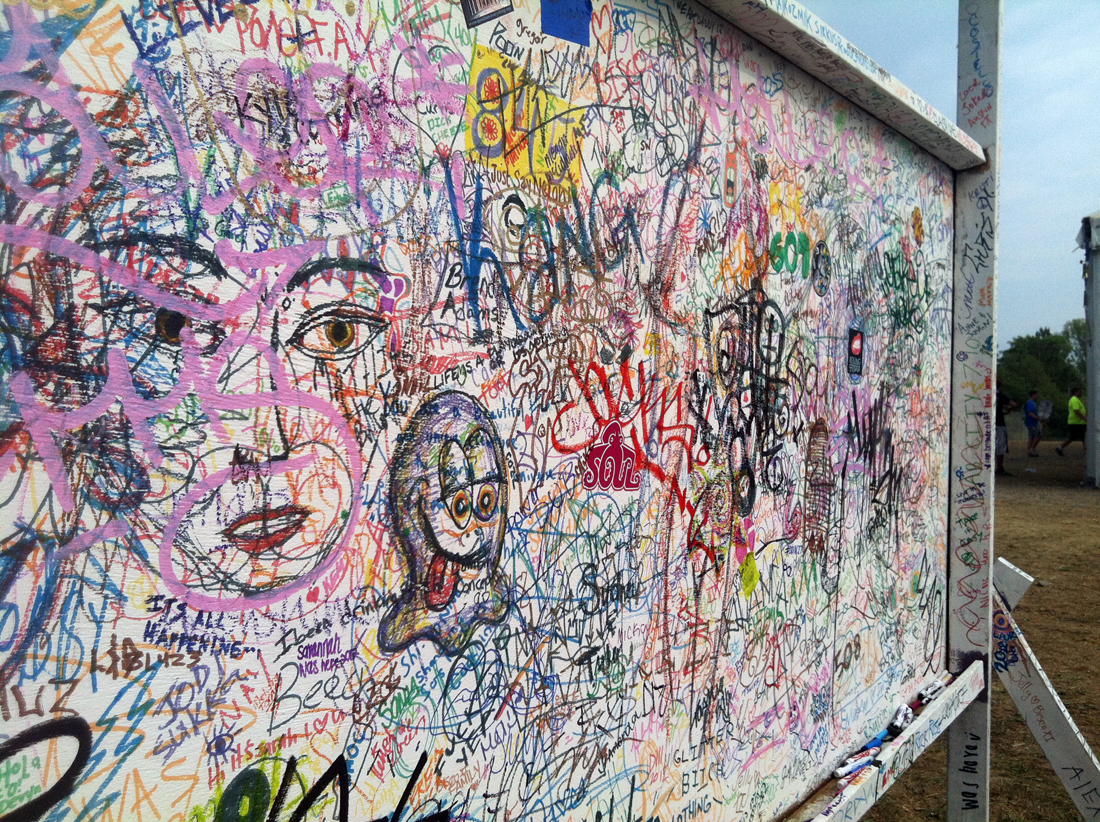 Upon entering the grounds of Camp Bisco yesterday for day two of the three-day affair, I was greeted by wordsmith Chali 2na performing on the main stage alongside Break Science, making for a nice warm welcome into Friday’s early evening line-up. I did miss daytime sets from Mux Mool, the Knocks, Eliot Lipp and Orchard Lounge, but that unfortunately is how it goes sometimes at events such as Bisco.

Hit the jump for more photos and my recap of Day 2.

Break Science is composed of Adam Deitch and Borahm Lee and the duo layers in dabs of hip-hop, glitch and dub in their original production. Alongside former Jurassic 5 MC Chali 2na, their set was danceable without losing its rough-around-the-edges quality that makes for an enjoyable performance, and one that has become a festival staple.

Making my way through the colorful-but-dust-covered crowd, I decided to dip into the B.I.G. tent to catch the tail end of NiT GriT’s set. Expecting to catch a super heavy dubstep-tinged Bisco-specific set, NiT GriT instead expanded beyond that pigeonhole and catered his set to the people looking to take a break and chill for a bit. People were scattered throughout the grass in the back of the tent, lounging on beach towels relaxing in the shade, with people swaying and occasionally dancing harder towards the front of the stage. It’s nice to be met with choice in an experience; either sit down or stand up but still be involved in the music around you. The visuals behind the soulful producer were also quite captivating.

Making my way back to the main stage for Portugal. the Man, I realized I wasn’t quite sure what their sound was all about prior to hearing them live for the first time. Expecting an indie rock flavoring, the 4-piece had more of a soft spoken approach to folk and perhaps it was the fact that I was right in front of the sound system but I couldn’t make out a single damn lyric. I also was super distracted by the fact that the lead singer was wearing jeans and a hooded jacket in 90 degree weather. Too cool? The songs they whipped out an acoustic guitar for were my favorite, especially in regards to providing a contrast in an electronic-focused music festival.

Next up was absolutely one of the best billings of the entire festival: the Ninja Tune showcase tent featuring Hot Sugar, Blockhead, FaltyDL and Starkey in what ended up being a full four hours of 1. me not giving a fuck about anything else going on at Bisco and 2. top-notch DJs/producers putting on clinics to a hungry crowd. I put my digital notebook (iPhone) away for this one, aside from typing out vague phrases like “Ludacris Stand Up”, “Open Up The Sky” and “Starkey’s flight was canceled so he drove here – big up!” I apologize for that’s not insightful note-taking on my part but seriously just do yourself a solid and Google the music behind these fine gents. Backstage, I chatted the ears off of Falty and Blockhead alike and we walked around the grounds for a bit, making note of the various degrees of wild attire on attendees and stopping to snap pics of Blockhead posing with a dude in a hotdog costume. (You can find that gem on Instagram by searching user BlockheadNYC).

Riding high off of the quality music I had just been treated to for a good chunk of the night, I found myself in the photo pit alongside more photographers than I’ve seen all weekend, all getting prepped for Brazilian genius Amon Tobin. Amon is a producer and composer of electronic music who has released seven studio albums under Ninja Tune and has been in the game steadily since I was five years old.

His set was largely anticipated with a blacked out stage and everyone’s curiosity sparked. Throughout the beginning stages, there was a cubic structure lighting up in what was one of the coolest on-stage set-ups I’ve ever seen. It was almost impossible to capture it on camera, but I did my very best. Once the music started, building ever so slightly in what felt like an utter tease, it became clear that Amon was treating us to his renowned carefully constructed set and wasn’t going to cut any corners while doing so.

Amon was positioned inside the cubic structure and was illuminated performing every so often throughout the set. His live set integrates himself within and when you take away the source of the sound, it creates quite an intellectual reaction, making it both thoughtful and interactive. The system behind his sound was so massive, I was being blown away. The power behind what he was doing wasn’t overwhelming; it was welcoming and alluring, in what I’m billing as a massive highlight of the weekend. If you ever have the opportunity to catch Amon live, it is in your best interest to take advantage.

At this point in the night, my phone had died and all desires to know what time it was had vanished, as well as two Monster energy drinks. (Oops). I knew my late night options were looking like Bonobo and then Mimosa, but when I arrived to the label tent where Bonobo was slotted to perform, I was surprised to see less than 50 heads under the tent. I wasn’t sure if it had been canceled for some reason or another so I decided to take a seat and wait it out. What felt like an hour of anticipation went by, (and what I was told by a member of the crew was just about that), and then suddenly the lights switched and Bonobo was on stage behind the decks. In what felt like a matter of 30 seconds, the tent was crowded to the brim proper and Bonobo began mixing for a special DJ set. Much like I had anticipated, Bonobo had me at hello and from there on out it was simply amazing. I went over to the other dance tent in search of Mimosa but couldn’t swallow the repetitive electro drops from Dada Life during my wait and called it a night.

My picks for day three include Yacht at 4:15, Atmosphere an hour later, followed by Starslinger, Holy Fuck, Big Gigantic, Bassnectar, Dillon Francis and A-Trak. See you in the dust bowl.

Next ArticleKAB is brought to you by...