Last year, Andrew and I had the opportunity to cover the 10th-annual Camp Bisco music and arts festival in full force and I’ve happily accepted the solo mission for coverage this year. (You can check out last year’s full coverage here by day one, two and three respectably).

Hit the jump to check out my gallery from Day 1 and my recap.

Even prior to this year’s festival opening its gates, there were already announcements for changes and improvements, whether subtle or more widely noticeable. For starters, attendees could arrive to the site earlier than before, with the gates opening Wednesday evening so people can set up their camping sites. Last year, people told me they waited anywhere from 5-10 hours to reach the grounds, so I’m happy to hear that the festival adapted to ease the process for those camping overnight.

To my knowledge, this year was the first to see an enforced age restriction for entry, where attendees must be over the age of 16. The festival also organized a shuttle service and I saw more cars this year proudly displaying that they carpooled to Camp. Additionally, there are lockers available for rent this year, which I’ve actually never seen before at any of the festivals I’ve attended, so maybe that will cut down on theft or items-swallowed-by-Bisco this year.

For the sixth year being situated in the fields of the Indian Lookout Country Club in Mariaville, this year marks the first that there’s been a fully-functionable ferris wheel on site and has made for a popular meeting place for friends as well as was a gorgeous landmark, with bright lights illuminating the night sky. With the addition of the “light tunnel” connecting the dance tents to the main stages as well, it has become quite clear that Bisco has borrowed fan-favorite elements from other festivals such as Bonnaroo and Electric Zoo.

I missed the first act I wanted to see (Rubblebucket) but made it on site in time to catch part of Star Eyes‘ set, which thankfully contrasted and relieved my ear drums from the too-early-in-the-afternoon-for-harsh-commercial-dubstep coming from Zeds Dead over at the main stage. There were less than 30 people or so in the dance tent for her set but she slayed it as if it was overflowing with festies and that’s part of the beauty of why I respect the DJs I respect. Always a nice treat to catch a member of the T&B fam upstate in my eyes.

I left the label tent halfway through to get situated for Crystal Castles, who I billed as a must-see for this year’s line-up. The security announced that it would be a no-photos-allowed set and they weren’t kidding as I saw at least two fancier-than-mine cameras snagged up by the men in red.

Crystal Castles is an electronic band – one that is comprised of purple-haired pixie Alice Glass and Ethan Kath. They also featured a live drummer for their Bisco set which really aided in the performance. Glass has a really interesting backstory, one that is heavily influenced by punk culture, and she didn’t surprise me at all when I saw her swigging straight from a bottle of Jack Daniels in between songs. In fact, her attitude and demeanor on stage is one that is very much influenced by her days in the all-girl crust-noise band, Fetus Fetale.

Jumping into the crowd, it was very much an all-eyes-on-Alice type of set and my eyes were glued to her the entire performance. Take away the high-pitched screams and yelps and chanted vocals into an effect-heavy mic and you’re left with a stripped series of strong and catchy beat production from Kath. Together, the duo fall under a category of Whatever-They-Are-Doing-Is-Working-For-Them type of vibe and their set was simply fun with good energy.

As I shortly learned thereafter, it is much more fun to make fun of Skrillex than it is to admit that I actually enjoyed his set. The contrast from seeing him last year to this year was remarkable – and could have a lot to do with the fact that the man Sonny has learned how to actually DJ and mix two tracks into one using CDJs.

Skrillex, who was top-billing for the entire festival, played for an hour and a half, rinsing in quite the variety of sounds and samples. He saved his go-to single track “Scary Monsters and Nice Sprites” for the last ten minutes of his set which was played in the first ten minutes of his set last year (unless my memory deceives me). Given the commercial success of Skrillex (and the fact that people are still getting his haircut), it was nice to hear that he has improved leaps and bounds in his still relatively newfound craft.

His set had the crowd captivated for the duration and he also couldn’t help but hop on the mic saying things like “shout out to the people holdin’ animals on sticks ‘n shit” while standing behind a huge LED-laced display in-between pyrotechnic displays. So that was that. It wasn’t terrible. And, to help ensure a smile as I go back to poking fun and contemplating what the world of mainstream electronic music is coming to: it was announced today that Skrillex will be contributing to the soundtrack for the upcoming Disney animated film Wreck-It, Ralph.

I left the grounds as the Disco Biscuits began their evening set and will be returning today, specifically for the Ninja Tune showcase featuring Hot Sugar, Blockhead, FaltyDL and Starkey, and also hoping to catch Portugal the Man, perhaps some Nit Grit, a DJ set from Bonobo and catch up with Mimosa.

PS – Unfortunately, someone has in fact already died. 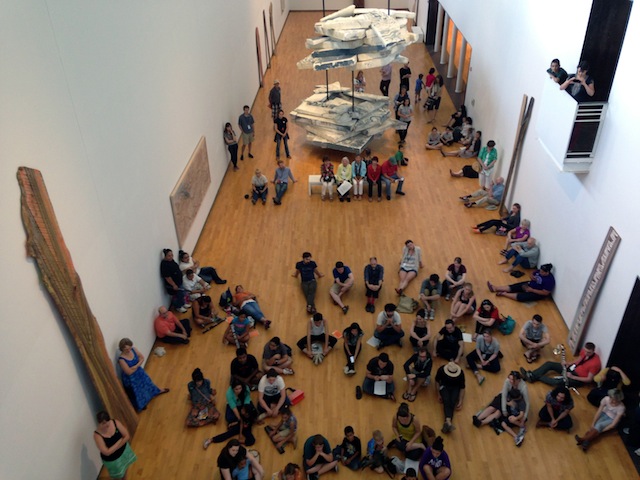