Are you a hydrophobic introvert who is being incessantly hounded to don the latest fashionable swimsuit and take the aquatic plunge? Do your friends insist on showing you a secret waterhole they claim only a select few know about? Is every grocery storeâ€™s beer aisle attempting to sooth you with the sweet sunny melodies of the Beach Boys? Well, worry no further my sweaty friend. I have composed responses to many of the things your water-loving cronies may say to you. 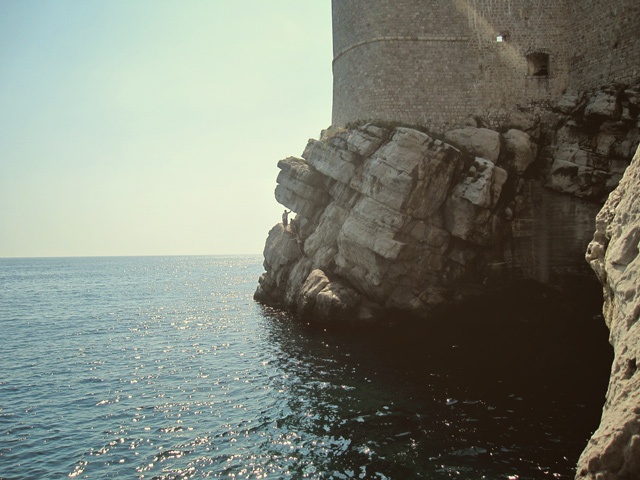 I always assumed stating the simple fact that Iâ€™m an aerobic organism thatâ€™s unable to respire underwater would be enough for people to understand why I prefer not to swim, but they continue to look at me like I just told them I occasionally molest gophers. What follows are some of the actual things people have said to me about swimming over the years. When I hear these things I usually just smile and nod or think of a lame excuse not to swim – like I donâ€™t own a bathing suit (true) or Iâ€™m made out of starch and will disintegrate (not so true). But, I think Iâ€™ve finally had enough. While I could actually voice my opinion to these people face-to-face like a grown up, I will instead act like a true product of my generation and rant about it on a blog.

â€œItâ€™s so much easier to move in the water.â€ No itâ€™s fucking not. I absolutely guarantee I can run faster than you can swim. Michael Phelps canâ€™t swim faster than a brisk jog. Also, I can prove mathematically that itâ€™s not easier to move in water than it is in air. Itâ€™s called the drag equation (this is not a formula to become the best dressed man in womenâ€™s clothing – or the other way around).

â€œIt might be harder to move but youâ€™re much more free. You can travel in all dimensions.â€ Whoa, how about you slow down there Descartes. I suppose you may have more freedom of mobility along the z-axis but Iâ€™m pretty sure youâ€™re going to be spending most of your time along on the x-y plane at the waterâ€™s surface like the air breathing loser you are. Your vertical travel is severely limited by your lung capacity and the human bodyâ€™s inefficiency at dealing with pressure changes.

â€œWater is relaxing.â€ Wrong. Treading water takes quite a bit of energy. I challenge anybody to a stamina competition where they tread water while I stand on dry land next to them.

â€œI meant floating on the water in an inner tube or other inflatable device is relaxing.â€ Okay, well that doesnâ€™t really have anything to do with the water anymore at that point does it? Put your inner tube on the grass and sit in it. Same fucking experience.

â€œBut you can drink with friends at the pool.â€ I can drink by myself on my couch.

â€œThatâ€™s not very social.â€ I can put on an old episode of Friends if I have to.

â€œItâ€™s so hot out. The water is cool and refreshing.â€ God invented air conditioning and Old Spice deodorant for a reason. He even gave them fun, seafaring names like Pacific Surge.

â€œHumans are made to be in the water. Itâ€™s natural. Weâ€™re surrounded by liquid while we develop inside our mothers.â€ I wasnâ€™t practicing my backstroke in the womb. Humans are one of the few animals that donâ€™t instinctively know how to swim. Whoever â€œmadeâ€ me a swimmer must have been a real asshole of an engineer. Youâ€™d think they would have given me, say, I donâ€™t know, some fucking flippers maybe.

â€œThere are like tons of hot asses at the beach, dude.â€ Good point pervert, but I prefer the bookish type. Nothing quite turns me on like an erudite lady sitting quietly by herself.

â€œJesus, Matt, have you ever even been to the ocean? The waves are amazing.â€ Yeah, because if I donâ€™t like the water Iâ€™m going to love the idea of giant waves of it crashing onto my head, and the undertow pulling me out to drown at sea. Awesome.

â€œWhat about boats? Theyâ€™re fun.â€ Boats arenâ€™t fun. Anybody who thinks a boat in itself is fun is fucking retarded. The things you do on boats can be fun, but I imagine most of those things involve swimming, so no thank you.

â€œYeah, well, youâ€™re all pasty and gross. I have beautiful tanned skin.â€ Enjoy your cancer.

And Iâ€™m not even getting into the dangers of snapping turtles, jellyfish, alligators, sharks, water bugs, and guys from the Jersey shore, whom the mere sight of will send you running for the nearest cliff to throw yourself off of. I seriously pray for sweet death every time I see one of your blowout haircuts. As if swimming in water isn’t bad enough, the thought of swimming in an ocean of your Tag Body Spray is even worse.

There’s also this river-dwelling bug in the Amazon that will crawl up your penis and explode. It’s not a good time at all, and I heard they’re making their way up north.