Skeletons in the Cupboard: The Imminent Threat of Fracking in NYS

What is Hydrofracking? Simply put, hydrofracking, or hydraulic fracturing is extreme gas drilling. Gas drilling that requires millions of gallons of water, tons of toxic chemicals and sand, and is done under very high pressures at great depths, horizontally. Although natural gas is produced, a whole host of other problems could arise because of this extreme drilling including drinking water contamination, air pollution, groundwater pollution, and subsequent serious adverse health effects. 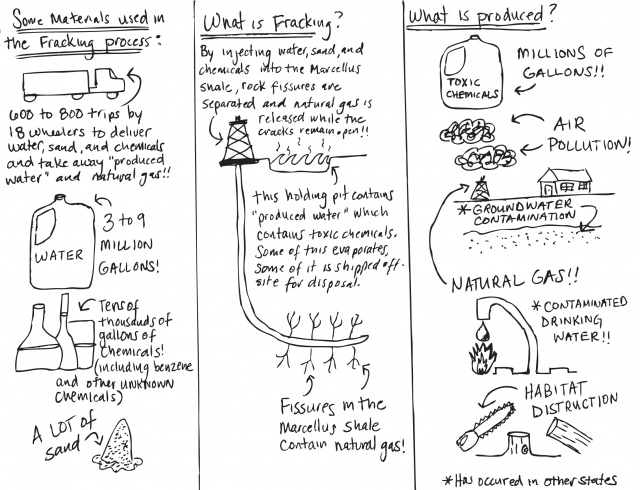 This week Hydrofracking made headlines in New York State because of the release of 1,500+ pages of fracking guidelines. These guidelines, formally called the â€œrevised draft Supplemental Generic Environmental Impact Statementâ€ (dSGEIS), are the Department of Conservationâ€™s (DEC) attempt to respond to the over 13,000 comments they received after the release of their original draft in 2009. Many of these comments were made by citizens, non-profits, and local government officials, who vocalized concerns over regulatory loopholes favoring the gas drilling industry and putting the environment and public health at risk. The public comment period for this new document has been extended from a mere 60 days to 90 days, but environmental groups continue to fight for more time, especially because the communities hit hardest by Tropical Storm Irene are the same communities where fracking is proposed. Will residents whose focus is to rebuild have enough time to read over the lengthy dSGEIS and make the necessary comments? Will farmers whose crops have been destroyed feel financial pressure to lease their land to gas drilling companies? Concerns over climate change and its impact on flood planes have also been raised. As the debate on hydrofracking wears on, the issues surrounding it become more complicated, contentious, and cumbersome.

Although the dSGEIS was only made public on Wednesday afternoon, watchdog organization, Environmental Advocates of NY, has already assembled a short response citing three specific reasons the dSGEIS doesnâ€™t do enough to protect New Yorkers. Their response highlights the DECâ€™s failure to address adverse health effects on sensitive populations (like children), their ignorance of the economic burdens fracking places on surrounding communities, and the absence of a ban on ANY of the chemicals used in the fracking process.
So, why should you care? Well, currently the gas drilling industry is eyeballing the Marcellus Shale, which is rich in natural gas and located in 28 New York counties, including Albany County. Many of these countiesâ€™ economies are largely based on agriculture. If hydrofracking were to occur in the Marcellus Shale in NYS, an accident resulting in groundwater contamination could devastate crops and livestock and destroy the agricultural sector in that area. And accidents DO happen. In Chautauqua County, in Western New York, the Department of Health has documented over 120 cases of groundwater contamination from gas wells. New Yorkâ€™s drinking water is also at risk. The documentary Gasland highlighted some serious cases of drinking water contamination in Dimock, PA, a town only about 30 miles South of Binghamton, NY, where residents could light their tap water on fire. Unfortunately, flammable water isnâ€™t the only problem for communities surrounded by gas drilling wells. Some of these communities have been plagued with a variety of health problems including, headaches, dizziness, tumors, neurological disorders, and other unusual diseases. Air pollution can also be tacked onto the list of potential impacts from hydrofracking. Last year residents who lived near gas drilling wells in New Mexico and Colorado found 22 toxic chemicals in air samples they collected near their homes, schools, and farms in the area around the gas drilling facilities. Some of these toxins were detected at levels 3,000 times higher than what is considered safe by federal agencies; four of which were known carcinogens. This is all pretty scary stuff.

I’m concerned with fracking because New York State has a terrible environmental track record. New York’s historic landscape is marred by the consequences of state inaction, through polluted rivers, preventable illnesses, leaking hazardous waste sites, and billions of dollars spent on the subsequent cleanups. Is New York ready to tack flammable water and contaminated farmlands onto this list? Over the course of the next few weeks I will assemble what I believe to be some of the top environmental mishaps that have plagued (and continue to plague) the health and pockets of New Yorkers. These examples will highlight the results of the State turning a blind eye to considerable public concern over unsatisfactory environmental and public health regulations. This is my attempt to show the inherent need for fracking regulations that accurately consider long-term negative impacts on public health, the economy, and the environment.

What you can do:
Learn more about Hydrofracking at:
Environmental Advocates of New York: https://www.eany.org/
Citizens Campaign for the Environment (CCE): https://www.citizenscampaign.org/
NYS Department of Environmental Conservation: https://www.dec.ny.gov/energy/46288.html
Capital District Against Fracking: https://www.facebook.com/CapitalDistrictAgainstFracking

Call Governor Cuomo and tell him to ban fracking in New York State:
Governor Cuomo: (518) 474-8390
You can find a suggested script, and more information about making a call at: https://act.credoaction.com/call/report/index.html?cp_id=126&tg=752

Next ArticleThe other side to #albchickens