If you were looking to relax from your work week, hanging out at Valentine’s last night was definitely not going to help you find anything remotely close to calm solace, to say the least.Â  The bill for this show garnished a necessary, chaotic, pick-me-up many had been waiting for all month. For those anticipating kicking the weekend off on a weird, PBR-and-synth-infused note, Valentine’s was the place to be. Sweaty, loud and packed to nearing capacity. 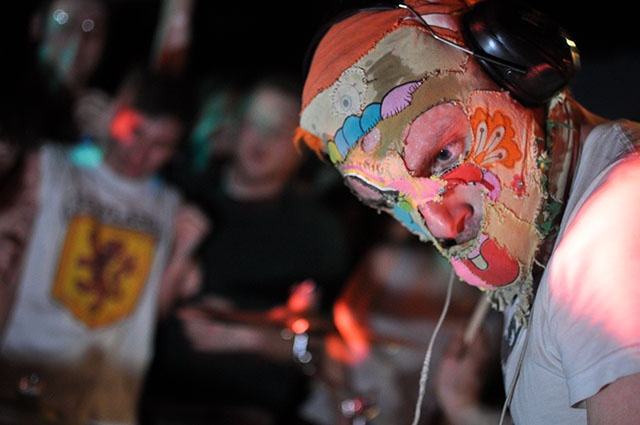 Upon arriving at Valentine’s, scoping out the crucial (upstairs or downstairs?) and haphazardly ducking up the stairs and into the crowd, it dawned on me fairly quickly that Iâ€™d be kicking myself later for forgetting my earplugs.

The only normalcy of this evening was that the show took some time to get off on its feet.Â  An hour plus in and the first and only band to grace the actual stage got started.Â  Everything else about last night as a whole felt weird, or at least a little bit off, to me.Â  Good weird or bad weird, musically for me it varied, but Iâ€™ll leave it up to you.

Beware! The Other Head Of Science is a 5-piece from Albany, members of the b3nson recording clan, and also are for lack of a better term, total nerds.Â  Theyâ€™re passionate about being nerds though, and it also is crucially helpful that each member has musical talent at the base of their collective creative drive.Â  Self-described as â€œelectro-rock freak-outâ€ music, members Jesse Horton, Matthew Ferguson, Richard Nolan Jr., Seth Tillinghast, and Kamran Parwana put on an energetic and gritty performance.Â  Their sound is full, with frisky synth and keys, eclectic thrashy vocals, and heavy, fast-paced instrumentation with guitars, bass and drums.

In describing one of their songs, â€œBig Apple 3am,â€ they explained that itâ€™s about â€œNYC falling into the Atlantic Ocean,â€ as their keyboardist, aware of the energy and atmosphere, adjusted an LED to focus on some kids dancing near the stage.Â  In encompassing the aforementioned nerdiness, when one member had some technical difficulties, he reassured the audience that he was just â€œrebooting.â€Â  Beware! Is enjoyable as hell to see live.Â  Highlights from their set included â€œHow We Stole Jack Whiteâ€™s Tesla Coil,â€ â€œWinter Coatsâ€ (for those in the know about the secret society re: facial hair) and â€œDonâ€™t Bum Rush the Avocado,â€ off their 2010 release â€œBig American Godzilla Party.â€ If these guys ever wrote one of the books they had scattered on their end of the merch table, Iâ€™d be first in line.

â€œI dedicate this song to the 55 bus,â€ belted one of the members of Girls of Porn.Â  â€œI last rode you on March 22nd, 2011.â€Â  The guys of this Albany-native punk band, set up and played on the floor to the left of the stage, and I was too far back amongst the shifting, disorderly crowd to catch a glimpse of what any of them looked like, but the Internet tells me thereâ€™s 4 of them: Josh, Max, Christian and Kieran, and that they recently recorded a live 2 track for a split 7â€ with Dadfag at Don Fury Studios in Troy.

Their set was way too loud and way too short.Â  I was into it as much as I could be from my detached location, noting the distortion of the high, drawn out guitars, occasional echoed lyrics and degenerate drumming.Â  I especially appreciated when they described one of their songs as â€œbeing spanked when you didnâ€™t deserve it.â€

The mess of the crowd shifted once more to the left for Lightning Bolt.Â  People set up camp on the vacant stage and eventually began jumping off of it, hanging from the ceiling framework and piling on top people standing in puddles of littered confetti and spilled drinks that coated the floor. 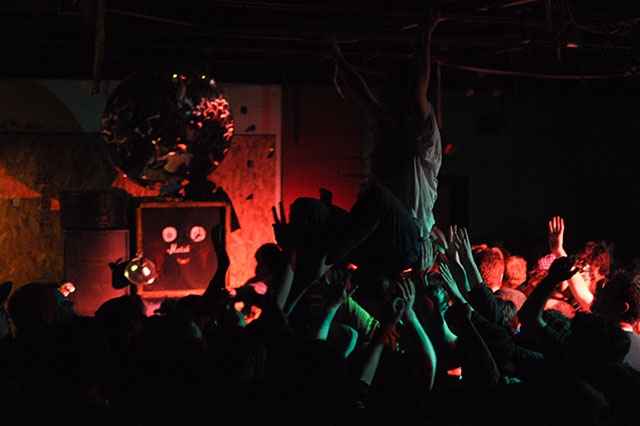 Lightning Bolt hails from Providence, Rhode Island, and are a duo composed of Brian Chippendale on drums and vocals with Â bassist Brian Gibson and are in a genre all their own, but closely bordering noise rock and punk.Â  The band has several noticeable quirks such as avoiding stages, wearing masks, playing at high volume with heavy distortion and often being vocally incomprehensive with chants and screams.Â  Chippendale also alters the sound of his vocals, by rigging his mic on his hood or mask to be run through an additional effects processor, while Gibson plays with both overdrive and delay pedals.Â  Since 1997, the duo has put out 5 full-lengths and several singles on vinyl, through Load Records.Â  The band has cited composers Philip Glass and Sun Ra as compositional influences. Awesome.Â  Their performance last night was very chaotic and aggressive. They were fun to see (bonus points if you could actually, physically see them through the huddled mob of people), and were definitely something different, leaving ears ringing into the night.

Special thanks to Josh Coletto for bringing Lightning Bolt to Albany.Â  I think we needed this.

After a rescheduling in April that (disappointingly) shed J. Cole from the bill, Big Sean finally hit the Upstate Concert Hall on May 6th. With support lent from Casey Veggies and Justine Skye, all the performers carried a lot of energy right into Big Sean’s set. I arrived during Justine Skyeâ€™s set and immediately wished…

I’ve really been enjoying checking out recent releases and talking nonsense about them in my reviews here on KAB. For those of you unfamiliar, I’ve been spending my summer assisting at Fuzz Records and we recently got a huge order in. We at the shop invite you to check it out and you can hit…

Railbird is an experimental psychedelic pop band that simply rules. They are one of my favorite live acts to see, period and they are coming around these parts again soon. Railbird, now based out of Brooklyn, is native to Saratoga Springs and most recently played in Albany back in September alongside Braids. It was awesome… 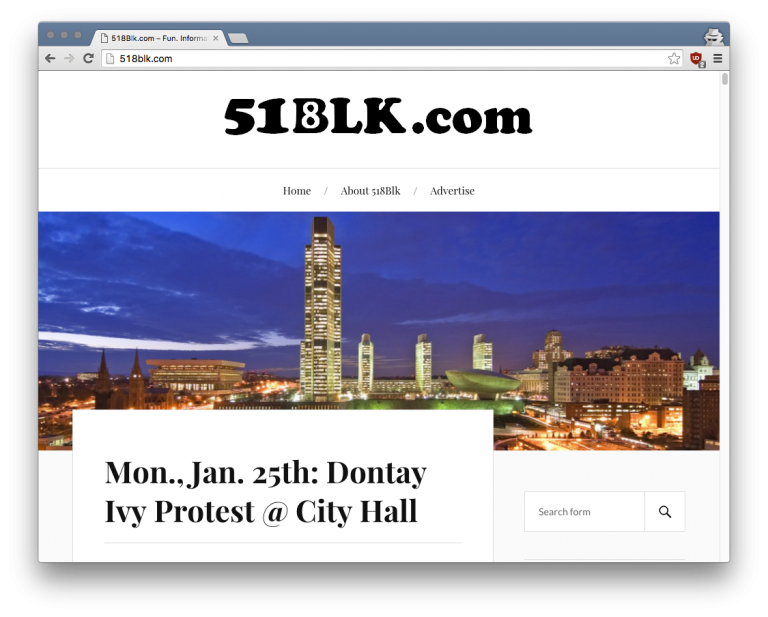 Ada Harper wrote me to spread the word about the website she’s started, 518Blk.com. From the about page: 518Blk.com is a site for the Capital Districtâ€™s urban community to discover events and information relevant to them. Itâ€™s a place to start conversations and connect with like-minded people. My hope for this site is to bring…