Last night, 4,500 of our closest friends flocked around the outside of the historic Washington Avenue Armory and pulsed inside for hours, hands up and asses out. Bass heads wereÂ summoned, from all over the Capital Region and beyond, to board theÂ mother shipÂ back home to get lost in the spacey electronic sounds for a few fast-paced hours. 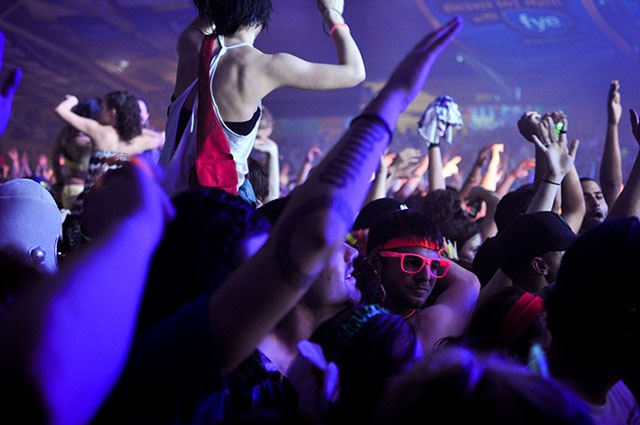 Bassnectar, the moniker for DJ and electronic music producer Lorin Ashton, attracted an eclectic and colorful crowd to the auditorium, where everyone communally drank up the sweet nectar of his sound swarm. Also hitting the decks were opening acts Eliot Lipp and EOTO. It was truly impressive that this show started on time, given that the staff had to accommodate an event that was at capacity for the entire evening, as well as host a solid bill of 3 different electronic acts. Despite the scattered line outside the Armory, which stretched around the block, moving fairly quickly, I still didn’t catch a single beat from Lipp. Eliot Lipp accompanied Bassnectar on 10 shows of his majority sold out spring tour, which spanned the east coast from Providence to Burlington to Portland to Boston, with a final stop in our fair city.

Lipp recently released a collaborative remix album, Brolabs, which you can download here for free.Â Highlight tracks include “It’s Time To Leave,” remixing with Pretty Lights, Big Gigantic on “Yeah,” and Mux Mool on “The Outside.” Each song was created with a personal touch and some face time, not done via trading samples over the Internet. He’s up to some good things these days and I recommend you keep him on your radar upcoming, especially with this summer’s festival spread in mind.

Second on the bill was another prominent festival favorite, EOTO. The duo, comprised of Michael Travis and Jason Hann (both of nationally acclaimed jam band the String Cheese Incident), play together in this electronic project, performing live without prerecorded loops and improvising the entire duration of their sets. Both have a background with professional drumming and joined forces in ’06, playing live drums, guitars, keys, vocals and with Ableton. The pair can also be dubbed as workaholic road dogs, touring across the U.S. with 60 shows in 64 nights, all pre-festival season no less.

A blue wash of lights poured over the duo last night as they powered through their set, hyping up the crowd in preparation to the headlining Bassnectar. People, packed like sardines in the general standing area, were already drenched in sweat a half hour into the music. EOTO provided funky drops, with some downtempo trip hop, and dance-inducing melodies on the spot and was an overall good vibe, although I’d say a bit heavy on the drum effects at times. Hand drumming was a nice touch and their live mixing was done fairly well. In being purely improvisational, they had a good flow and for the most part played a diverse array of grooves.

Bassnectar was on the decks in no time and turned the Armory upside down and inside out. There apparently was no dress code (and no water cannons), but we were hit with a ton of expected bass and unexpected wardrobe mishaps. People dressed to the nines in festival get-up came out of hiding, proudly revealing stomachs, arms, legs and faces covered in messy neon paint. I personally spotted some wearing glittery fairy wings, various shades and styles of wigs, leotards, capes, masks, neon sunglasses, swirly skirts, all sorts of LED infused accessories, a couple Keep Albany Boring t-shirts in the mix (big ups!) and even some costumes, likely recycled from Halloween. And for some reason it all didn’t feel that out of place. We perhaps could have done without being surrounded by some of the shirtless, sweaty bros, chicks in underwear, bras, bikini bottoms and inexcusable nip slips, but hey, Bassnectar helped set some free.

It was a weird but enjoyable spectacle to people-watch, especially walking through the crowd and from the bleachers, where it was hot as hell. For some reason, in my experience at least, being on the rail of the photo pit for Bassnectar was cooler temperature-wise than anywhere else in the venue. Bassnectar provided the audience with cases and cases of cold water bottles, where people from Bassnectar’s crew dropped water into the mouths of those within reach, like a positive (and muchly appreciated) whack-a-mole arcade game. It was a fun energy shift from EOTO to the highly anticipated Bassnectar. May I kindly remind you that this was a sold-out concert at the Washington Avenue Armory? No huge surprise there that things got nutty.

Lorin worded it best himself, saying “Holy shit!” as he glanced at the wild, roaring sea of people in front of him. He was centered on the stage and sandwiched between two large LED screens, an even larger screen behind him and layers of multicolored spotlights poured down on him and out into the audience. The silhouette of his constantly swaying chest-long brown hair contrasted with the random, distorted visuals projected on the bright screens. Sometimes the visuals matched up with the music, such as during his dubstep remix of “Pink Elephants On Parade,” (from Dumbo) but sometimes they didn’t make sense at all. To say it was a bit intense is to put it mildly; the visuals and light show were straight up crazy. People were blissfully struggling to get closer to Lorin, viewing him much like a queen bee in a dance party hive of a bass-induced frenzy.

People had their hands up, rocking to the music for 100% of the show, from the very front all the way up to the bordering bleachers. I personally was thankful for the earplugsÂ Bassnectar’s crew gave out for free at the merch table, although the sound wasn’t overwhelmingly loud. I also saw that the medic team was quite busy, so hopefully attendees learned a valuable lesson in remaining hydrated in the future.

Anyhow, Bassnectar provided us with tracks featuring flawless mixing and for the most part, played what people came to hear. Everyone was feeling the bass vibrations in the gym floor and Bassnectar himself looked like he was having the time of his life from behind his table, giving both his gear and the audience tedious attention.

He treated us to his take on the Beatleâ€™s â€œLucy in the Sky with Diamonds,â€ and the throwback from his catalog with his remix of Nelly Furtadoâ€™s â€œMagical World.â€ Another serious good vibe song was the Pixieâ€™s â€œWhere Is My Mind?â€ which sounded great slowed down and had people swaying, singing along and probably wondering the same question.

His assortment of time signatures and beats were diversified nicely, as he didnâ€™t end up chaining himself to the dubstep fountain of 140 bpm range. He played original productions such as â€œBass Head,â€ â€œTimestretch,â€ and various other tracks, some off of his latest EP Wildstyle. Other tracks he played included â€œFabricationâ€ by Emalkay, â€œSkullcrackâ€ by 16bit,”Yes,” (a collab he did with Datsik) and the Doctor P remix of â€œStarâ€ featuring Camilla Marie.

Another show highlight was when he scolded the â€œdisco biscuit glow stick throwers,â€ saying that that doing so is â€œvery 1990sâ€ and also â€œthe most annoying fucking thing in the world.â€ He then continued playing and got inexplicably political, showcasing vivid footage from Glenn Beckâ€™s Restoring Honor event in D.C. and Sarah Palin clips from Fox News. From there on out for some reason, my friends and I were kind of bored and didnâ€™t know why.

Lorin called it a night 15 minutes before the clock struck midnight and masses of people exited into the night, quite possibly to one of the many after shows, such as Higher Organix and Timbre Coup at Valentineâ€™s or Dirty Paris down at Red Square.Â Special thanks again toÂ Guthrie Bell Productions for making it happen and another congrats out to Mike Belhumeur who attended the show for free courtesy of the Keep Albany Boring ticket giveaway.

Bassnectar, who last played in Albany at Red Square in 2008, has certainly come a long way and later said on Twitter,Â “if gratitude was a drug I would be soooooooo stooooooned right now.” Weâ€™re pretty grateful too. 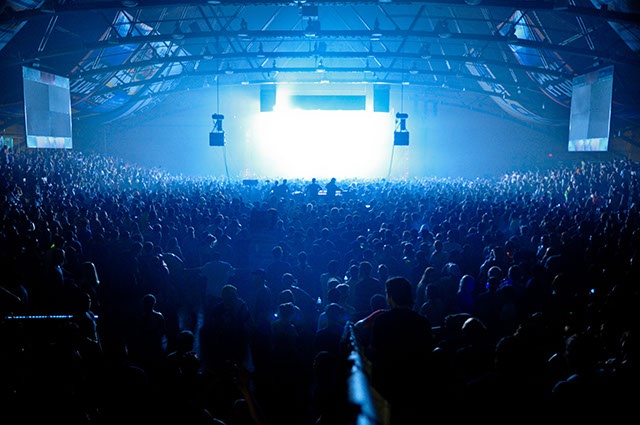 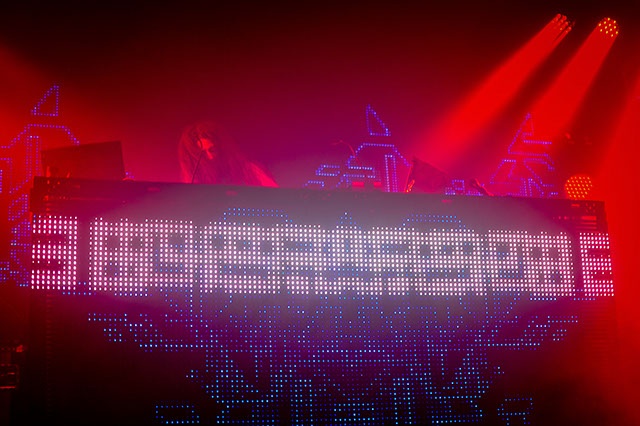 Also, be sure to check out Andrew’s favorite photos from the show!

Next ArticleInterestingness in the local news vol 14