This past Friday, Step Up Presents brought the 2011 Saints & Sinners tour featuring Between The Buried And Me, Animals As Leaders and Tesseract to Northern Lights for a night of melodic debauchery much to the delight a packed, sweaty venue. The tour’s pit stop in Albany marked the second-to-last show in a 30+ day run, during which Animals As Leaders released their sophomore album, Weightless. 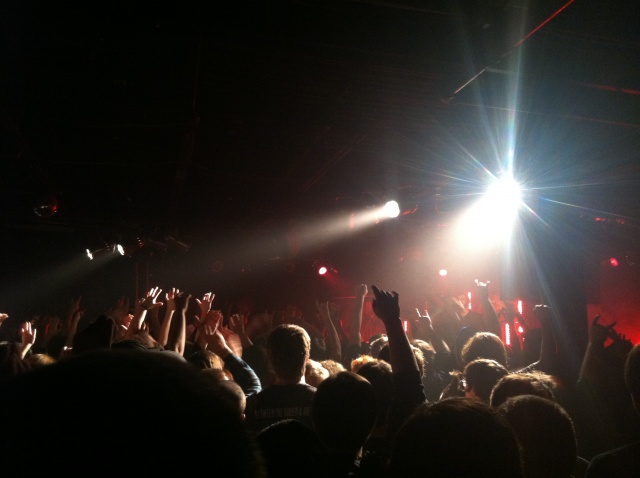 Tesserect, BTBAM and Animals As Leaders made for a complimentary show billing â€“ although I did just catch the tail end of Tesserect kicking off the evening. Tesserect was followed by Animals As Leaders who stirred up a progressive melting pot of an influx of metal-based instrumentals with BTBAM turning up the heat and consequential aggression as headliners.

My friend described Animals As Leaders as â€œmusic to get lost in the jungle toâ€ and I couldnâ€™t agree more. Multi-layered compositions paired with passion and Tosin Abasi â€“ sign me up. Abasi is their guitar player and could probably lead an army with his guitar alone, heâ€™s that good. The other two members of the band help build the sound as stemmed from his guitar riffs, in a way that makes the music approachable and not just all about getting lost in endless guitar shredding.

Animals As Leaders is definitely a precise, technical band but their musical delivery still maintains a solid organic feel with high energy when performed live instead of just going through a set of dictacted motions. Their music could be considered a compromise of genres and influences in that they balance being heavy, dark, jazzy and progressive with an electronic flair, but they do so without doing any horrible injustices to any given direction. I pictured their set being more enjoyable in a larger space, but regardless their set was absolutely still the highlight of my night.

When you really think about it, being an active band for over a decade really is quite the accomplishment. BTBAM formed back in 2000, have put out 5 studio albums, swapped members of their line-up several times, toured with handfuls of bands in hundreds of places and dozens of countries (including returning to Northern Lights 3 times or so in their career) and still have an audience held captive. BTAM, statistics aside, made for quite the live performance from veteran musicians who have more than put in their dues but arenâ€™t quite tired yet.

The crowd wasnâ€™t as aggressive as it could have been but it also was shoulder to shoulder for majority of the standing room space. Highlights from their set included tracks â€œMirrorsâ€, â€œObfuscationâ€ â€œDisease, Injury, Madnessâ€ (all off 2009â€™s The Great Misdirect) and capping off the evening with â€œMordecaiâ€ as their encore. Overall, Iâ€™d say it was a good performance (not amazing) as Animals As Leaders stole the night for me.

If you were there, what did you think?

From SPIN’s ‘5 Things SPIN Learned About Big Boi’s ‘Vicious Lies and Dangerous Rumors‘: “She’s my new Sleepy Brown” Big Boi said, comparing Barthel, who was snapping pics of the MC, to the Dungeon Family hookmaster. His connection came from a bit of kismet. Turns out Big had unknowingly heard Phantogram’s ethereal “Mouthful of Diamonds”…

It is acceptable to feel a haunting aura when listening to Los Angeles indie rock outfit Warpaint. Since 2004, the band has dealt with darker, moodier and more psychedelic textures than most of their indie peers. On the bandâ€™s debut EP, Exquisite Corpse, we saw Warpaint dealing with quiet yet lush sounds, a pre-cursor to…

Our friends behind the Beat*Shot Music Festival have just announced their line-up for the festival’s 5th showcase, which will take place at Red Square on July 6th. For those of you unfamiliar, Beat*Shot Music Festival is a 1-day annual event that highlights many talented artists, both performance and visual alike. The event features local businesses…

The Albany Music Coalition has announces a free (donations accepted) series of songwriting workshops which will take place at Fuzz Records. All sessions take place at 6:30pm starting on August 2nd. The schedule is as follows: â€œLyrics Firstâ€ August 2, with panelists: Eric Margan (The Red Lions) Eric Krans (The Parlor) Jen Oâ€™Connor (The Parlor)…

photo andrew franciosa The other night, my friend was browsing iTunes for quite some time, in typical music-browsing fashion: some comments were made, some nods of approval, some smirks, some groans, some “oh well, if you like ________ you should check out ________,” some more comments were made, etc. After about 10 minutes, a bit…