Hi, this is Scott b2b KC. I met Cunei4m when he saw a post I made on here about how everyone should be listening to Mosca productions. Then I started regularly going into his yardcasts. Then we started rappin’ hours at a time on Facebook chat, in which we’ve thoroughly analyzed everything from Transmat records to Soul food to how riding mopeds makes you evolutionary superior to your fellow man. Below is probably my favorite mixtape we’ve put out there so far, it bangs really hard. The party this Friday will be serious business.
KC on the interview duties below! 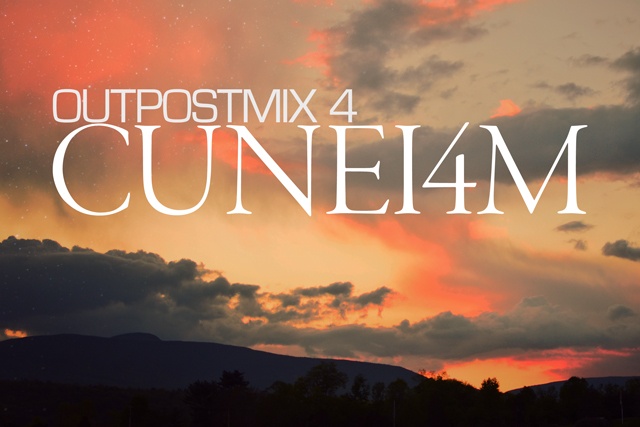 When I received the interview questions back in my inbox, there was a disclaimer attached — reminding me that I just interviewed a writer…as well as an immaculate DJ, a good friend and a fellow night owl… and so as a result, “shit is LOOOOOOOOOONG.” Yeah, well, guess what, we’re posting it allllll…. This is one of my favorite interviews to date and comes recommended, all while playing the OUTPOST1 mix available conveniently above…

How did you arrive at your moniker? Any background or meaning behind it? Back in the day when I was writing graffiti and trying to hone my artistic style, I was writing “Form” which is loosely defined as the essence of a thing without regard to its physical aspects, be it color, texture, shape, etc. I always tried to distill the work to its most basic, so it fit. It mutated from “Form” to “4m” to “::III” with four dots to represent the four and three lines to mimic the shape of the “M.” When looking for a DJ name, I opted for “cunei4m” as it harkened back to that distillation yet also referenced the basis as well as the evolution of written language itself which is sort of a union of concepts I try and bring to the…ahem…table(s). Truth be told, I had another DJ name when I first started, but that’s a WHOLE other story…

Can you tell us a little bit about your introduction to the music scene and how you got started DJing? I grew up with Motown and really loved that stuff…still do…yet I recall being around 12 or so and there was this late-night radio show that played all sorts of crazy techno from Smart E’s “Sesame’s Treet” to Blue Pearl – “(Can You) Feel the Passion.” I used to make pause-button mixtapes just so I could listen to this music in the light of day, though my friends at the time had no idea what it was and were much more content listening to the influx of R&B’s “golden era” of TLC, En Vogue, Shanice, etc. I saw a common thread of 4/4 and vocals in which all that made sense to me. Fast forward to high school when I was finally able to start going to raves and witnessing this, a good friend who had a DJ older brother and his hand-me-down turntables, some record purchases, and I was off…though first on the house tip before delving into techier sounds.

Do you remember the first party or event you played? How shitty was it? What did you learn from it? The first party I actually recall was Daisy Chain in McAllen, Texas which must’ve been 1997? It was a day party at some obscure ranch which was three hours from where I lived and like 30 minutes from my grandmother’s house. I had no idea what to expect but the crowd was the most open I’ve ever experienced and were totally down for whatever I was playing. It was an amazing time and those kids in the Rio Grande Valley continue to be my marker for a good crowd. Audio still exists from that set…

How has utilizing sites like ustream and mix/soundcloud influenced your DJing? I’ve been using Ustream since September of 2009 and was using justin.tv before that. I think it’s a great outlet and a good way to reach your audience and feel the same way about soundcloud. It’s just a super-convenient way to put your sounds out there and get that feedback. Conversely, it’s also a great way to hear what others are doing. You end up getting this sort of network that’s just sharing sounds back and forth. It’s a great way to hear new things though I also think you have to be careful to still hone your own sound and aesthetic rather than just leaning toward what’s hot and emulating that.

How do you mentally prepare for live DJing/mixing for Internet listening as opposed to DJing a night out? I don’t ever really prepare for any set. I have things that I know I’d like to play, but nothing is ever planned and so it always tends to morph into something different as it progresses in sort of an organic fashion and not all those things always get played. It’s much more entertaining that way…I think for all parties involved. I tend to just go with it. There are times where I can just get relentless and go a bit harder and keep that up and there are others where it just gets to be too much and I delve a bit deeper. It’s all a matter of my mood, mostly, and naturally the crowd also plays a huge factor in that.

If you could DJ anywhere in the world, where would it be and whom would you split a set with? If I could DJ anywhere in the world, I think it would just be some random abandoned space. I grew up on renegade parties with 626 Soul in Austin, Texas and those were always the most fun…just getting together with friends and knowing everyone there and everyone just in it for the music and hanging out together. That being said, it doesn’t really matter much where just as long as I’m surrounded by good people and playing with friends.

Your collection of music is rumored to be… the absolute best. Is it overwhelming that it is ever-growing or have you accepted your self-created fate of being a dope music librarian? Hahaha!! I’m humbled by that and there are WAY too many things I still want for me to confirm that vicious rumor. I recall going to see DJ Rise’s apartment in San Antonio…a local hero. He had crates and flight cases stacked on his stairwell, across his whole living room and just rattled off nonchalantly that “those four crates are Masters at Work…those three are Kerri Chandler…” and so on. It can be overwhelming, but it tends to just be what it is. I’ve definitely accepted this fate long ago and am still hungry for more. I hope it never gets old and as long as it’s still new, which it ALWAYS is, then I’ll continue to add. My mom was a librarian all of my life, so I hope that makes her proud!

How do you combat boredom? The internet is a lovely beast and I can waste hours on it. I also am an avid reader due to my aforementioned mother’s librarian curse. I also LOVE to cook and so spend way too much time looking at recipes, cookbooks, shopping, creating meals, etc.

What do you do when you’re not making or playing music? Well, I have a “regular” job, so that takes up a great deal of time. Aside from that, it’s cooking, eating, watching movies and the usual domestic chores just like everyone else…

When you’re traveling, how do you like to pass the time en route? Food, food, food, and more food. I always just find random restaurants and tend to go off the main roads to find small towns and eat local delicacies and anomalous food items by some transplant who just happened to live there and set up shop.

Describe your music using food analogies. I merely look at my ingredients and think about what I’d like to do with them. Every set/meal has to start somewhere, so you take that main ingredient as a starting point and go from there. You embellish and add certain spices but what it all comes down to is how cohesive the actual set/meal is. You have to have a trajectory and each note (both musically and flavor-wise) has to not only build upon what preceded it, but also work to introduce what’s coming next, harmonize with it, and also bring out certain surprises which are underlying…recontextualizing what’s familiar by juxtaposition with something surprising, exciting, and unexpected.

Write us a haiku about Outpost1 or Albany. Technically, haiku are supposed to have a reference to the seasons…but I’ll just work with the 5-7-5 format…

An outlet arrives
And calls itself, “Outpost1…”
I hope they’re ready.

What’s your favorite type of taco? Whoa…just one?! This may be the hardest question of all…like which child should suffer the axe. Growing up in Texas and especially SOUTH Texas, there’s no shortage of tacos. Naturally, a ton of favorites flood to mind and are all specific tacos at specific places, so I’ll stick to just what my staple is and how I judge the authenticity and caliber of a place. Lengua. Yeah, beef tongue. It’s a tricky meat to cook and usually gives you the worth of a place pretty quickly. It should be tender and juicy and served with no frills…some cilantro and onion and some lime wedges on the side…and ALWAYS in corn tortilla*S*…so you can split the filling into two tacos. Sorry, vegetarians for the previous…migas are the judge of a good place for you.

Next ArticleWhat we have to look forward to, if we’re lucky.