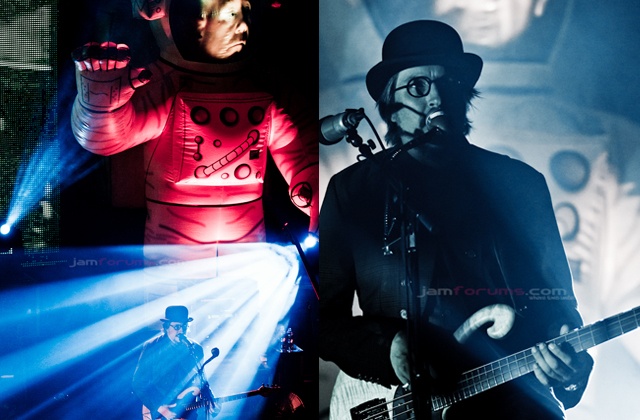 On Tuesday, I went with my friend Skinny to the Primus show at the Palace Theatre in downtown Albany. Primus, for those of you who arenâ€™t familiar, Primus is a funk/thrash/jam band that has a pretty strong cult following. Hereâ€™s a really dorky blog post I wrote about them last summer. Fronted by bass virtuoso Les Claypool, Primus has recently released their first album in 11 years. Iâ€™ll get to that in a bit.

Les Claypool has a way about him that really captures the hearts of nerds across America. I think itâ€™s something along the lines of his inability to give a fuck about anything at all in the entire world. That, and his godlike ability to slap out the raunchiest grooves known to man. Droves of nerds flocked to the sold out show (myself included), most of them older guys equipped with band tees and scruffy beards. Vibes were overwhelmingly positive before the show, with strangers saying hi to one another and not throwing a douche-fit when someone accidentally bumped into them from behind.

After the fans all bellowed a hearty chorus of â€œPrimus sucks,â€ Les came out on stage, wearing his trademark bowler hat. His swag was so thick you could cut it with a knife. He immediately burst into this fatass, funky jam that gave the crowd a collective boner.

Primus rocks just has hard as they ever have, and hearing older hits like â€œGolden Boy,â€ â€œJerry Was a Racecar Driver,â€ â€œOver the Fallsâ€ and â€œSouthbound Pachydermâ€ live was phat. Some of their new stuff is also great, like â€œEternal Consumption Engine,â€ â€œTragedy is Coming,â€ and â€œLee Van Cleef.â€ Lee Van Cleef is an old spaghetti western star that Primus, in typical Primus fashion, decided to write a song about. Itâ€™s bouncy, springy, and the musical equivalent a funny little man in a suit and top hat doing a funny little jig.

Much of the concert was spent jamming on existing riffs, which actually turned out to be one of my few complaints. Have you ever been to a show where a jam band jams for too long? As much as I hate to say it, I grew a little bored at certain points of the set. Iâ€™m not sure if it was just my unfamiliarity with the new album, or my short attention span, but I think I noticed people around me losing enthusiasm too. The crowd would start out dancing enthusiastically to a song, and then slowly transition from a full dance into a subtle head bob. It wasnâ€™t a boring show at all, a few of the songs were just a little drawn out.

You may be saying, â€œduh, thatâ€™s the point of a jam band,â€ but I assure you, it was a little drawn out.

Les didnâ€™t speak to the crowd too much, except for a few occasions. One notable occasion was when he explained the albumâ€™s name, Green Naugahyde. It turns out that naugahyde is a term for fake leather. Ler, the famously quiet guitarist, didnâ€™t speak at all except to make a joke that the entire crowd was stoned. And Jay Lane, the newish drummer, didnâ€™t say anything at all.

Since the sold out concert was at the Palace, it was remarkably restrained. Although people did stand, they stood in front of their assigned seats. There was no moshing, like the other Claypool shows Iâ€™ve been to (both in NYC). Since there wasnâ€™t a mosh pit to hide inside, the people at the show had to find their comfort level in doing that strange head bop/body groove thing that awkward white people do when jam bands play.

One hidden bonus of having a seat was that it was actually possible to drink a beer during the show. I should also add that almost everyone there was stoned.

On a funny note, the â€œbouncersâ€ were old ladies. True story – I tried to tip one of them after she helped me find my seat, and she got really awkward and scampered away. Another story — I watched one of them grab a joint out of some dadâ€™s hand as he passed it to his buddy and walk away with it. This would be a good point to say â€œI bet she smoked it herself!â€ but I am almost 99% certain that she did not.

Primusâ€™ new album â€œGreen Naugahydeâ€ was hailed by critics as a return to their original sound from the early 90â€™s (we wonâ€™t mention their Limp Bizkit/Metallica-esque Antipop from 1999). So when I went out and bought – yes, bought, I didnâ€™t pirate it because I want to support my man Les – the album, I was excited to annoy my roomate with funky new Primus tunes like I had in the past.

When I heard the album, however, Iâ€™d be lying if I said I wasnâ€™t a tiny bit disappointed. The music is more in line with his newer solo albums than classic Primus. It also seems like itâ€™s primarily a vehicle for Claypool to express his discontent with society. References to reality TV sucking, people being fat, and people wasting money make up a good chunk of the lyrics. He kind of sounds like a cranky old man sometimes. I guess, in a way, heâ€™s allowed to, due to the fact that itâ€™s his song, on his album, by his band, recorded in his studio, on his label. Having said that, I still canâ€™t help but miss the more irreverent, silly, and unusual lyrics of albums past.

The best way to explain my issue with the show:

^^ This is the Les Claypool that I love.

^^ This is the Les Claypool that exists now. To be fair, thatâ€™s a solo Claypool song, not a Primus song, and probably my least favorite song heâ€™s written.

Heâ€™s still the coolest person in the world, an incredibly talented musician, and as unique as they get, but heâ€™s grown from a wild nâ€™ crazy kid to an eccentric gentleman.

Primus finished off the show with Wynonaâ€™s Big Brown Beaver, one of their biggest mainstream hits. It was especially relieving to hear when it came on, because I could finally sing along again after not really knowing a lot of his new songs. But then, I became one of those losers who sing along with every single word in the song like â€œhey guys I know every word to this song!â€ So I guess it was kind of a bittersweet moment. 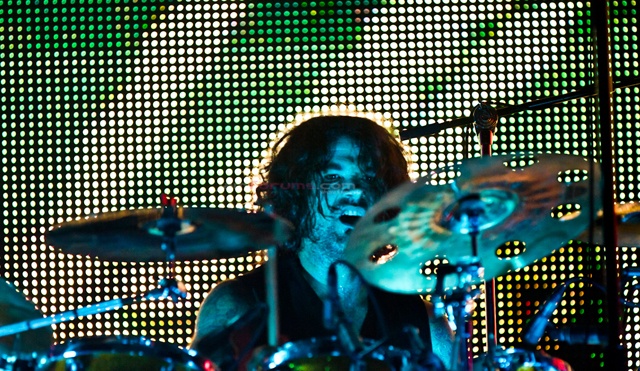 McGeary’s was absolutely the pre-game spot to be as early as 5pm and up until the last possible drop of beer was consumed before the Primus show began. The sold out crowd gathering downtown was like a nerdy high school reunion for many; lots of hugs and old friends united under Primus.

Given my initial impression and exposure to the band Primus, I pictured an eclectic, perhaps older, goofy crowd and I wasn’t necessarily wrong, either. My first observation was that at a Primus concert, it is not only seemingly socially acceptable but almost expected that people were rocking Primus t-shirts. With some standing in line buying another to add to their collection. I’ve always been under the impression that wearing an artist’s shirt to their show was lame, but Primus and their fans reminded me that it is really up to your own compass to do so.

Entering the Palace, it was a swarm in their pristine lobby, with people being ushered to their seats straight up grinning. I feel like the reason Primus was so fun to see live was because before it even began people were already talking about how “epic” it was going to be.

Sandwiched between two massive blow-up astronaut dolls, with an expressive and interactive face projected on the astronaut’s helmet watching the crowd, I wasn’t sure if I should recognize him or not. It could have been a politician’s mug alongside Primus, or it could have been someone’s grandpa. The faces remained for the entire show, watching out and peering out creepily in all directions.

“You forget common courtesies such as saying hello because you get in such a flow,” said bassist/vocalist Les Claypool. He mumbled on about being a space cadet (#punny) and forgetting various, routine things. He then introduced a member of his band with something along the lines of “He’s an unsalted snail reluctant to come out of his shell, but he’s going to play fancy things for you momentarily.”

Ever since I saw Bob Dylan a couple years back, I’ve always paid attention to bands who play for the bulk of their first set without addressing the fans. Primus didn’t “greet us properly” until about then. For some reason, I’ve always associated that with gimmick-free, veteran rock ‘n roll. And Primus went hard for being veteran musicians with over two decades of performances under their belts. In the setting of the gorgeous Palace theatre, it was kind of hard to rock out and dance to but it wasn’t necessarily laid back enough just to sit and vibe to; I was a bit stuck how to react as I soaked it all in.

Primus’ set up also featured a giant, centered LED projector behind them, showing various 3-second clips of vintage drug paraphernalia, retro family scenes and weird GIFs of everything and anything. It was very much a component of a Ratatat or Flaming Lips live show, which was awesome. My small attention span was glued to the screen as much as I tried to fight it and it was easy to get sucked in to their moderately subliminal, plotless, visual story. Bonus points for the Pop Eye cartoons at intermission as well. One bro in front of us declared the show “a presentation of art.”

Primus is arguably of their own breed. They sound like they should be considered classic rock, but they still manage to draw a younger audience and have adapted somehow to modern sounds. I didn’t grow up with Primus, like many in the crowd, and so for me, if it wasn’t for good company and being open-minded, I would have been bored. 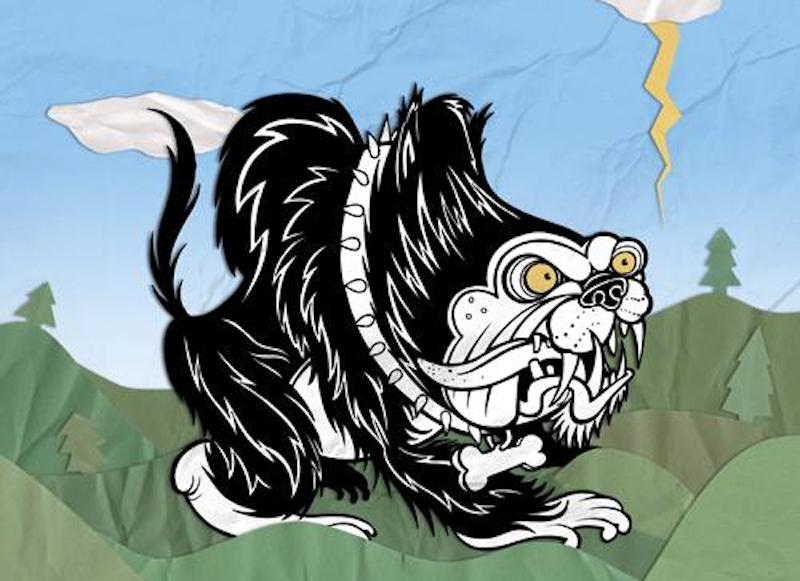