Some of the best advice I’ve ever received was in the form of three simple words. Barely visible and scrawled in white, fading paint marker on the bottom of a crumbling brick wall, in all capital letters, were the words “LOOK AROUND YOU”. Author-less and gimmick-less. Hidden but beautiful in its harmlessness. I couldn’t tell you where I saw this, how old I was or who I was with, but that moment, of an instantaneous (and conversational) connection of being a passerby and relating to a public space continues to resonate within me. 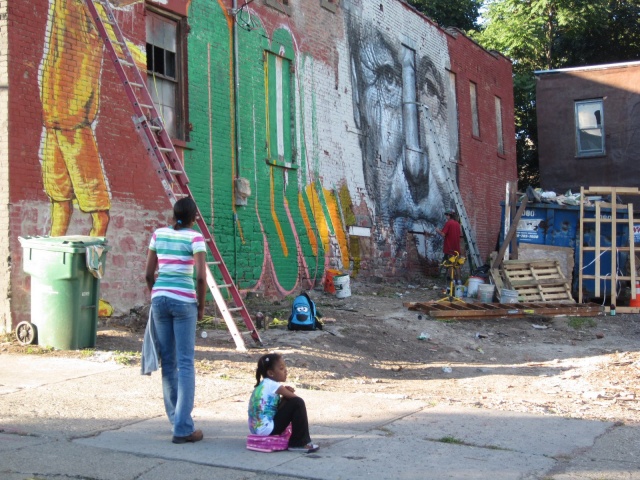 And that’s what the Living Walls is all about. That moment of seeing something unordinary in an ordinary space. That moment of seeing something that stands out but fits in at the same time. Engaging others in these curious moments amongst strangers and friends alike is a community-oriented call to action in reviving citywide decay and restoring peeling murals into their next life. It’s about promoting those moments of recognition, relation and inspiration. The Living Walls is a project designed to ignite these moments in our city and to use art in public spaces as a way to remind the community to LOOK AROUND.

And to those of you who feel the need to consult the dictionary to see if the underlying premise of the Living Walls and its artists actually does classify as “art,” well, I think you’re completely missing the bigger picture. This project indubitably is art in its raw, must unfiltered form, accessible to all in the community to share and talk about it. The Living Walls in Albany is organized and arranged in accordance to city ordinances and proper procedures, as executed and organized by Samson Contompasis, owner and curator of the Marketplace Gallery. 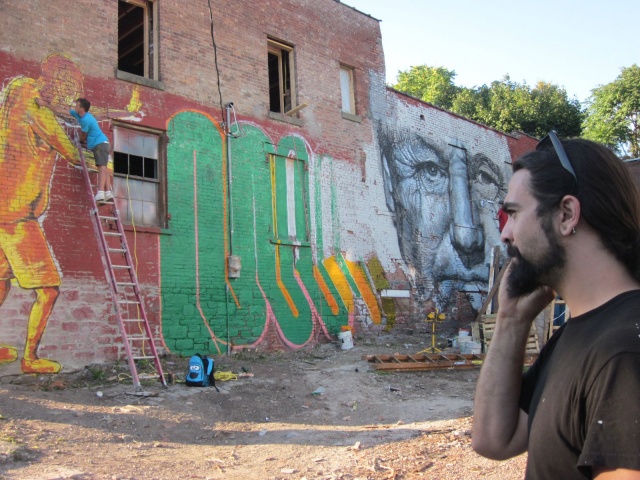 Gaia, whoâ€™s moniker comes directly from the Greek goddess of the Earth, had work in Albany last year during the arts-‘n-music-focused Heavy event at St. Joseph’s Church but this yearâ€™s Living Walls is his first time physically being in our city. Gaia, a native of NYC, has been making serious moves both on the street and in the gallery, as well as finishing his BA at MICA in Baltimore. (Iâ€™m convinced street artists donâ€™t sleep). He came to work on his living wall earlier than the anticipated dates (officially September 16-18) because he is leaving for a show in London. Awesome. Bonus: be sure to check out this interview Juxtapoz did with Gaia — it rules. 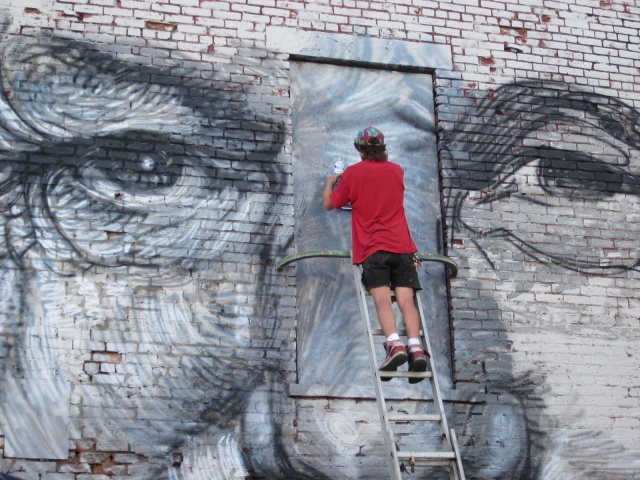 Nanook is a more elusive force, whose work displays very concise geometric and line work, and has been popping up on Brooklyn Street Art more and more recently. I personally donâ€™t know that much about him but I really like his work, which you can check out more in depth here on his flickr. 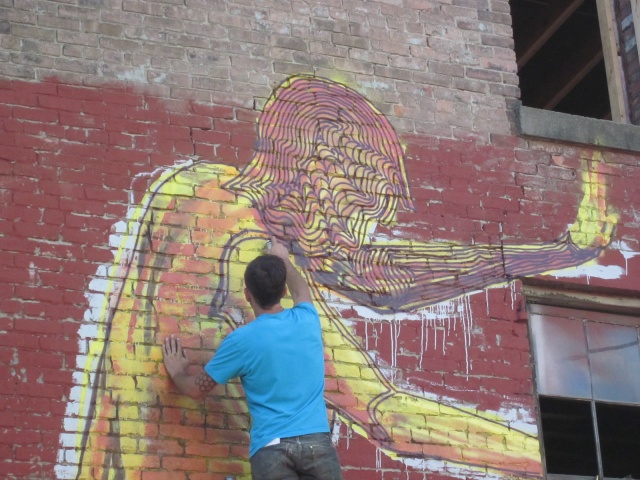 In Albany, Gaia teamed up with Nanook, to create the first wall of the project, which appropriately represents the movement itself pushing forward. The image is a figure of a man that is pushing a piece from the Empire Plaza Concourse towards Nelson Rockefeller. Think about it. 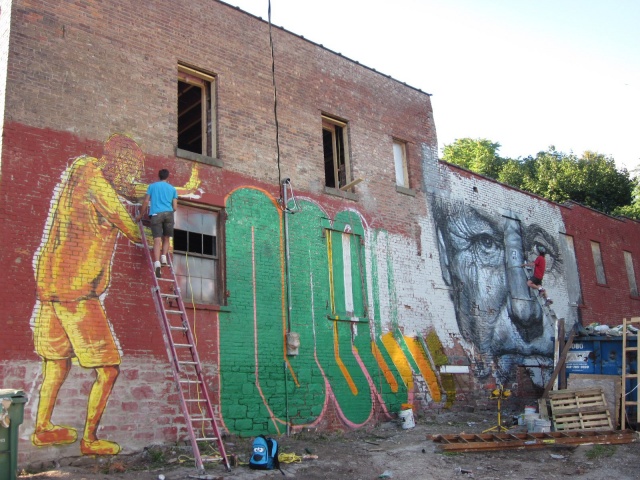 Iâ€™ll let the work speak for itself. You can see it from the highway if you know to LOOK for it, and you can peep it in person (highly recommended) down on Livingston Ave. Andrew will update this post with photos of the complete piece at a later date, promise. 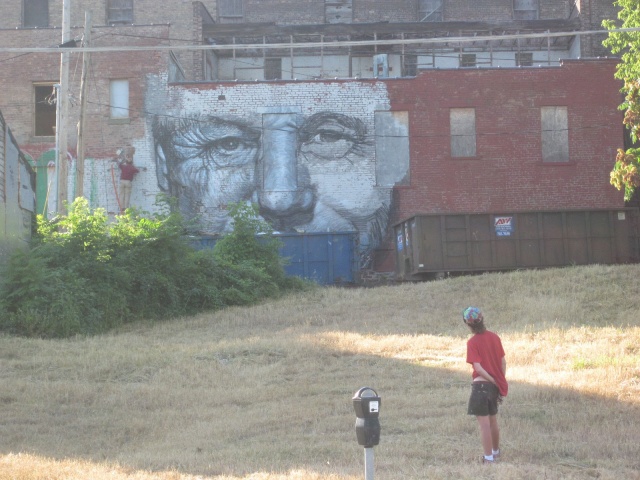 Until the next wall comes to life in the Albany edition of the Living Walls, be sure to LOOK AROUND YOU. 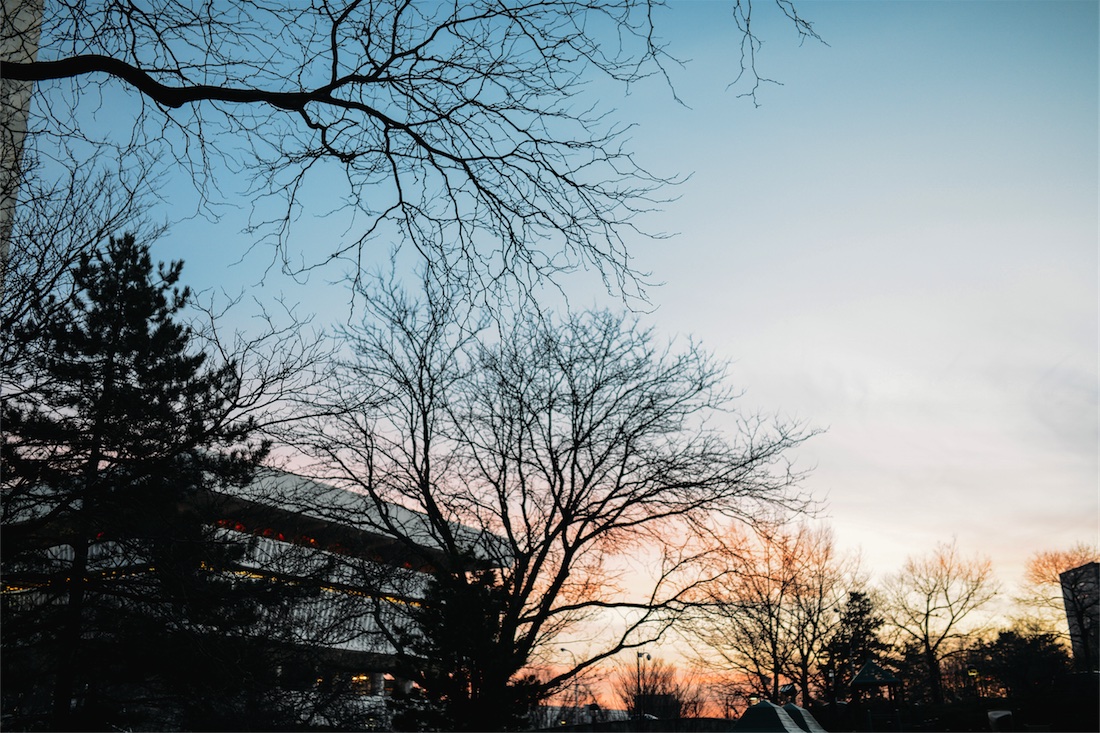