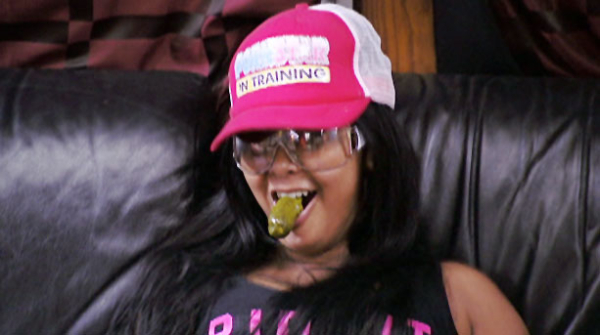 The episode starts out with the crew out drinking at a bar (surprise). However Ron is doing double duty since Sam is crazy so he’s drinking until she isn’t, or something. Maybe he’s getting ready for creep mode. Regardless, he’s shredding other peoples shots.

Back at the house, Snooki promptly falls asleep on the wood floor in the dog pen. Situation heads up to his room with his grenade from that night, gives her a shirt that says “situation” on it and when she tells him it’s purple, he tells her it’s “ok”. Pause. Sam makes drunk food, try feeding it to Ron and he promptly refuses it in the same manner a two-year-old would, which rules. Ronnie starts spinning and pukes into a bag, and all over his arm, and on Sam’s bed. All with Mike and the random girl in the room. Pure class.

Ronnie wakes up and shits blood. Actually. Doctor give him a nice finger in the bhole, which he appropriately preps with some lubricant. Diagnosis: too much drinking. Apparently drinking until you shit blood, that’s possible!

Snooki on a date rattles off “everyone google it, the ocean is salty from the whale sperm”. (It’s false if you failed Earth Science). The dude who Snooks hung out with blew up his own spot when he, like an idiot, told her he was previously engaged. He then, like a weirdo calls the house over and over to try and make amends with her. Pauly pretends to be an answering machine and dude actually tries to leave a message! Horrible.

The girls then go out to the sex shop, which might as well be the SUNY Albany halloween costume repository. Snooki, who is drinking beer out of a plastic cup in the car, is shit hammered and ends up wearing her “stripper pretending to be a baseball player” costume out of the store, and all through dinner too. Ronnie makes a lot of misogynistic comments throughout cooking.

Snooki goes to work, and tells Danny, quite possibly the only reasonable human ever featured on this show, “relax bro, it’s a tshirt shop” when he tries to get her to work, while at work.

Fast forward to when it’s time to go out to da club. There’s a lot of dudes cleaning their shoes and girls spraying faces with hairspray. Snooks brings back a dude who she wants to get it in with, but it’s shark week for her and nothing happens. Waste of the smash room. Dena’s dude calls her light, and says she should gain weight. The next day Snooks convinces her dude to impress her with his pole dancing skills and he rips it out of the floor like the gorilla juicehead he is. It wasn’t secured at all.

There was a keyboard cat and Snooki pistascio commercial. What?

Back out to the club. Sam is wasting everyone’s time straightening her already straight hair. Everyone agrees with Mike that the “only thing that needs to be straightened out is her brain.”

Regarding her dancing at da club, Dena delivers the quote of the episode: “face down, ass up, that’s the way I like to have a good time”. Pauly then for some reason that I think is good, entertains his stalker who just threw a drink at him during their last encounter. Also, it is sadly discovered that hot Israeli Danielle has an unfavorable tooth-to-gum ratio. She’s is back at the house for some reason, and is taking jokes from everyone like “what kind of bird brings the baby” and “Jack climbed up the bean what” (admittedly well) and leaves eventually after just hanging out. Can’t wait to see what can of worms that opens. Pauly knows how to stay entertained and this is clearly a good decision.

The preview into next episode shows Sam announcing that she “needs a hot guy right now” when she’s at da club and then 5′ 7″ Ronnie roid-raging and smashing all her shit in their room.

Sponsors! Duh! They help keep things moving over here at KAB, and they’re awesome. If you are interested in advertising, feel free to drop me a line using the contact page and we will get something worked out. Collar City CrossFit: Each group class is headed by a trainer, complete with a warm up and…

Are you a hydrophobic introvert who is being incessantly hounded to don the latest fashionable swimsuit and take the aquatic plunge? Do your friends insist on showing you a secret waterhole they claim only a select few know about? Is every grocery storeâ€™s beer aisle attempting to sooth you with the sweet sunny melodies of…

Our sponsors! If you are interested in advertising, feel free to drop me a line using the contact page and we will get something worked out. Collar City CrossFit: Before joining, everyone that I knew that did CrossFit and loved it. I’ve been going for about a month now and I totally get it. Check…

DJ LoFi Lobo exercised some subtle caution on his Twitter account yesterday, stating; “there’s a storm brewing at WCDB..could be tornado, could be drizzle. Stay tuned.” It has since been revealed that a handful of weekend evening shows have been implicated by a recent decision of the e-board members of UAlbany’s campus radio, WCDB-FM. The…

[tweetmeme]On September 17, 2010 a report was filed to the Albany Police Department by a University student alleging that a revolver had been pointed at him in an attempted robbery. Earlier that month, a string of break-ins took place involving sexual harassment, weapon-wielding, and college-age females. Unfortunately, for those of us who have come to…

This is my review of the latest, and supposedly the last, of the Harry Potter movies, which I couldnâ€™t remember the name of and was too lazy to look up. I should probably note that I havenâ€™t read any of the books and I think magic is stupid. Itâ€™s probably also worth noting that I…