Pauly and Vinny head to Vinny’s house in Staten Island. During the car ride, Pauly’s states “I had no idea it was an actual island, until we crossed the bridge.” Cmon Pauly. They get down to the food; it starts with pizza and moved onto pasta, chicken cutlets, potato salad, eggplant, corn, mashed potatoes, salad and more. Holy fuck, Italian people. 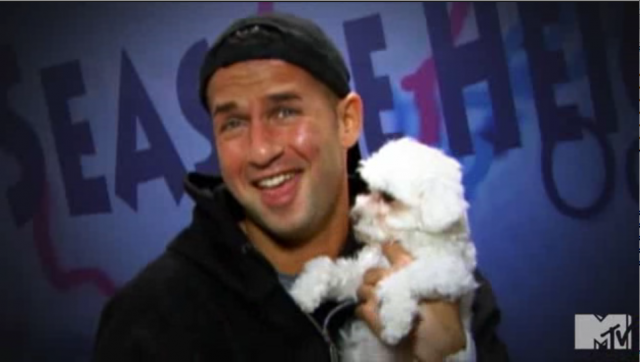 The girls go to GTL+Nails and Ronnie goes with. Situation is mad that he was left out again. Like a stand up dude, he then helps the dogs break out of their little pen, then also helps the dogs get food out of trash. He also gives them peanut butter and marshmallow fluff, delivered to the dogs direct by way of the hardwood floor. The dogs then, according to plan, piss and shit everywhere. Mike gets busted by Dena because he was holding the dog in the confessional, and now one side of the dog reeks of his cologne. Who the fuck puts on cologne when they’re alone in their house? Right after they wake up?
Also the dogs name’s are “Juicebox” and “Lean Cuisine.”

They go to Karma, Snookie meats some busted looking dude, and busts out this diamond: “Whoever I have babies with, he’s gotta be Italian because the last name needs to have a vowel in it, and I want my kids last name to have a vowel in it. And be tan. Obviously.” Vinny leaves with another actually hot girl. Ronnie and Same drunkenly kiss and basically argue all the way home. Holy fuck they’re the WORST.

Next day, Vinny goes with the girls to get spray tanned since he’s sick of being the palest one. Vinny stands there in his Arnold Schwarzenegger underpants and flexes while he gets his spray tan, which is hilarious. The tan also noticeably makes him darker. Holy hell.

On the way home, they see Rogers car, and Jenny honks and tries to get his attention, and he starts to book it. He dipped out because according to Ron, “he’s got a girl in the car.” Jenni goes home, leaves him a super insano message to find out he was late to the barbershop, which explains him not answering his phone and driving quickly. What a nut. Roger makes her feel like an idiot and tells her he needs room to breathe, hah!

The girls then start a water balloon fight and the guys end up taking things way, way too serious. Also Vinny hides to protect his spray tan. The dudes end up throwing all the girls into the hot tub, which is hilarious.

Ron and Sam talk about how they still love each other and want to work things out. Ron wants to go full bore and Sam isn’t into it, which might be the first intelligent thing she’s done so far.

The girls go searching for “juicehead gorilla central” at Jenks and then complain more about the dudes being ugly. They then head to an aquarium where there’s a penguin, and when the aquarium lady asks what kind of animal a penguin is, no one gets the answer. Which is: bird.

Then then again, head off Karma where Mike sees his friend Arvin, who quickly asks “where’s Sam.” Arvin tells Mike that Sammy has been hollering at him through BBM, oh shit! Mike obviously tells everyone and shit hits the fan. It ends up she was texting that dude as soon as she left the house, while Ron was crying and going nutty over her. Sam just blatantly denies it, then admits it, but prefaces it with he’s “just a friend.” Ron then tells Sam in a reasonable speaking voice and dignified manor, “I had every chance on Thursday to bring the hottest girl in the club home, but I didn’t because I was crying like a little bitch over fucking you.” Totes reasonable, bro!

Vinny and Pauly successfully end up just sitting on the couch and spectating, until Pauly decides to state, “If this relationship continues, I will kill myself.”

The episode ends with Ron yelling at Sam to go back home, and when she says, “let me go” he straight up screams “no” directly into her face. Solid move.