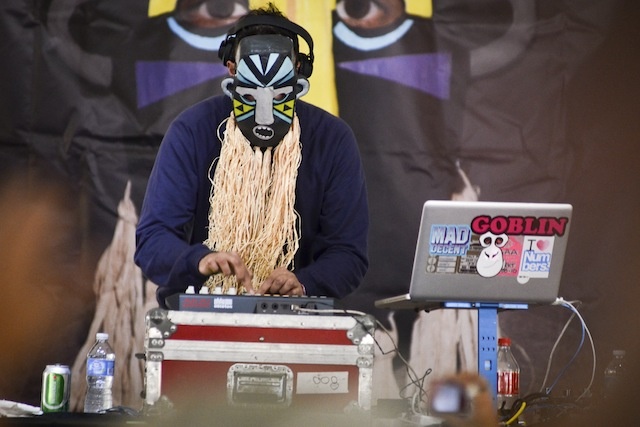 Music wise, we caught the last 5 minutes of Borgore, which honestly was more than enough. Andrew described his sounds as “animatronic dinosaur farts,” and that ended up being accurate. People sporting t-shirts that said “Sex, Drugs & Borgore” were almost worse than those wearing the t-shirts that read “Sex, Drugs & Dubstep.”

Anyhow, as people geared up and flocked to the stage for the New Deal’s final performance, we made our way to the smallest tent, the dance tent, which had an ideal crowd density, enough room for dancing and enjoying the music. The mud kept things cool, making it more bearable temperature-wise under the tent than outside of it. SBTRKT absolutely killed it, jumping around in tempos and even dropping a Roska tune here and there. SBTRKT wears a pretty alt tribal mask with a lei grass beard hanging down off the bottom. SBTRKT is a producer from South London and plays modern UK bass music of all varieties. Our friend, Dwell, made a sweet 3-layer stencil of him and ended up giving it to SBTRK after his set. Andrew, Dwell and SBTRKT shot the shit for awhile and it was rather #vip. Sweet. It was exactly the turnaround we needed after the Borgore turn-off and from this point on, we were all smiles for the rest of the night.

Following SBTRKT, we checked out Dwell and OneUnit’s vending spot, which they rigged up proper with light-up icicles and have a light-up goose mounted on a post, marking their territory. There’s a bunch of people holding it down for Albany, selling handmade clothes, custom fanny packs, trippy Homer Simpson posters (these were a huge draw for people walking by and rightfully so, it’s a pretty cool design), multi-layer stencils and jewelry. They’ll be vending all weekend, sandwiched between an old high school friend of mine selling sound-activated light-up t-shirts and the Methods NYC crew.

We capped off our evening with Skrillex and it was absolutely insane. Solely going off roughly-estimated numbers, I’d say that there were easily 5,000 people smooshed together under the Grooveshark tent to catch his set. I’m so glad that I saw him smoke a cig mid-set in person, definitely a highlight to catch classic Sonny “at work, doin’ his thing”. Parts of his set were actually enjoyable, (especially from the photo pit) and he definitely played what people wanted to hear. Rinsed in several times throughout his set was the “My Name Is Skrillex,” sample from his debut E.P. aptly called “My Name Is Skrillex,” released just over a year ago. Following his performance, I definitely overheard people saying that his performance was without a doubt the highlight of their weekend, worth the ticket price alone and one girl even said that she could die happy now. (But hopefully not). I’m glad we caught Skrillex’s set; my thoughts from my Twitter in realtime, “Filed under category things I’ll never understand. Awesome.” #sik

We’re headed back up to Camp within the hour, hoping to catch Das Racist, Break Science w/ RJD2 & Redman, Four Tet, 12th Planet, Ratatat and Holy Ghost! Scope the schedule here and let us know who you end up seeing.