Brostep to the beat

If I wasn’t a bit curious about the seemingly elusive DayGlow event, I simply would have trusted my gut and followed the trustworthy XLR8R guide to attending fad events, (such as Burning Man): don’t go.

However that slight curiosity got the best of me and Andrew and I chose to skip the massive line that began buzzing around 7 and showed up around 10 just in time to witness the beginning of what looked and felt like a shit-show-turned-into-a-rave-graveyard — cops everywhere, EMTs attending to those who went too hard, panicked girls with tears streaming down their faces, cops on horses, people pacing with their cell phones lit in their hands, people slipping on paint and breaking their fall with their heads and others escaping into taxies. 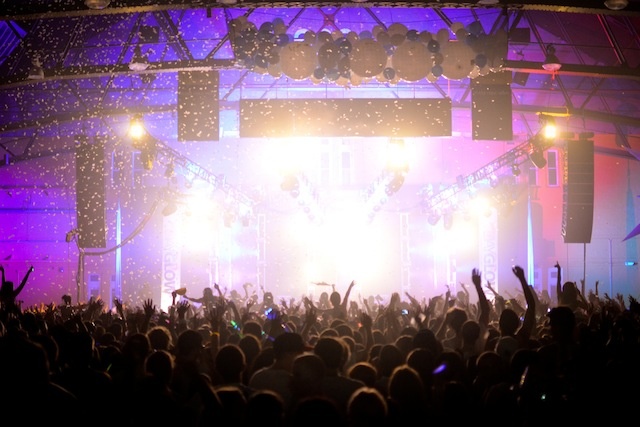 proof andrew is a good photographer

Once inside, it was a mass of UAlbany’s underclassmen donning white t-shirts, double-fisting $8 Bud Light Limes and scoping out the #redhothotties. I felt like I was at a massively overproduced movie that people paid for solely so that they could make out in public. However, it was actually more like that 3-5am period at an electronic music festival where nothing good happens and you write off your experiences the next day as simply lost in the Bermuda triangle of “festing”.

From a music critic standpoint, the music was secondary in importance. It could have been an iPod playing Skrilley tracks and occasionally a robot voice on the mic going “Mickey Mouse does drugs!” (actual quote) and people would have been into it. DayGlow was all about the scene. And it sure as hell was a weird one. On stage, in front of a blinding mass of LEDs projecting random visuals, an alien-like character on stilts sprayed paint at the crowd as confetti dropped from the ceiling. People emptied their #VIP tubes of neon paint on one another, as paint mixed with sweat to the soundtrack of horrible electro. It was exactly what one would expect of a party advertised as the world’s largest paint party where people bought tickets before they knew who was DJing. People came to party and so they did. On our way out, we saw DJ Alex English cleaning up outside, as the event still had a couple hours left to go.

No doubt a modern Hunter Thompson enthusiast would have covered this zany sold-out spectacle more accurately and with more zest than I am, but my review stands in 140 characters or less: If I was the mom of a SUNY bro and found out my kid spent $75+ of my money to go to this, I’d immediately cut them off. #DayBlowMe

Breaking: HRO identifies and names the target audience of these style events. Here’s the inside scoop.

Next ArticleQuality events for this weekend vol. 19