Brendan Lyons is at it again.

Known for such hits as “the bullseye parking decals” and “machine gun stockpile“, the enterprising local watchdog journalist at the Times Union posted one sloppy cop video today.

The video is from the Menands police department booking room after Brian Lutz, an off-duty Albany police officer, was arrested for falling asleep in his car stopped in the middle of I-787 next to a pile of puke. What a klutz.

Lutz, clearly a class act, was nabbed for DUI 11 years ago – a “good thing” according to the Police Union officials that were able to coach him through his arrest, because it puts him outside the 10 year window. These union reps, along with some outside legal advice, instructed Lutz not to submit to a breathalyzer, a practice pretty common with high profile arrests.

Slurred words and expletives towards the honest local cop that busted him, Lutz at one point cries out “why are you being so mean to me?”

To the rescue? Police Union reps that come in and guide Lutz on how to dodge the most punishment. The result? Don’t blow, bro.

KAB props go to District Attorney David Soares, who is clearly not loved by law-bending cops, as proof by the bashing done on video by the supposedly sober union reps. 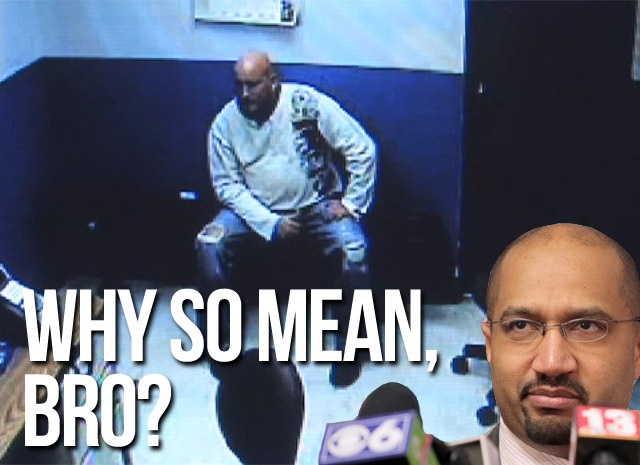 Next time? Take a taxi.