Skip to content
I dedicate this to â€œPeteâ€ who I sincerely hope goes and fucks himself.

The novelty of having your own apartment is quickly extinguished after you take your first crap with the bathroom door open and jerk off in your kitchen a couple times. Â After about a week of that you realize, not only are you a depressed, pathetic pervert but also a disgusting human being. Â Having roommates keeps both of those things tempered somewhat. Â Without them, my inner slob is allowed unimpeded flow throughout the halls of my apartment. 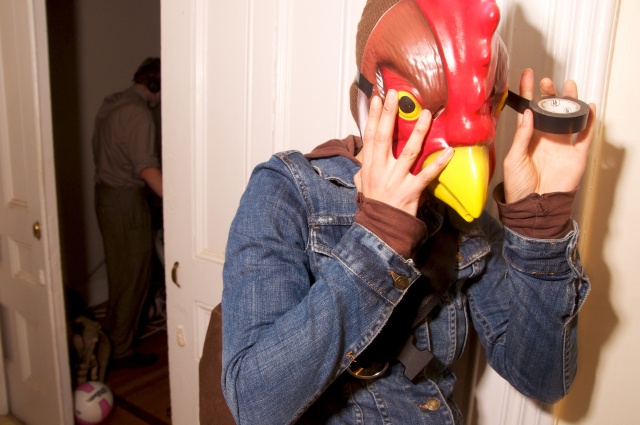 So, Iâ€™ve taken to decorating, which is a delightful activity despite the fact I often find myself climbing on top of things drunk – I have stumpy little arms that canâ€™t reach anything, attached to a hobbit like frame, yet I live in an apartment with ceilings high enough Iâ€™m considering raising a giraffe in my pantry. Â I need a step ladder. Â I would drink less but it helps me deal with the fact that the most expensive thing in my apartment right now is a rug. Â I hope it was woven out of pony fur and is being held together with virgin spit because if not, I doubt I can live with the fact I paid over a hundred dollars for a fuzzy brown pattern to put on my floor (apparently itâ€™s actually made out of something called Olefin which Iâ€™m pretty sure was the name of a bad guy in a Bond film).

Floors help us cope with our ever present struggle against gravity, providing an important surface for passing out on and making sure we donâ€™t fall into our basements. Â Iâ€™m not really sure where rugs come into play but I have one now so I guess Iâ€™m civilized. Â Maybe itâ€™s because I walk around like Charlie Brown all the time looking at my feet that I decided to enliven the perpendicular plane beneath me. Â I still canâ€™t help but think that decorating the ground is a bit like polishing your asshole (sometimes my analogies donâ€™t make a whole lot of sense and you should probably know that I donâ€™t care). Â It has also seriously limited the space I have for drunkenly practicing my soon to be mad-awesome moonwalking skills.

My dining room, which has massive floor to ceiling mirrors in it, great for scaring the shit out of yourself when you walk from the shower to your bedroom naked, is completely empty except for my bicycle, which has become about as useful to me as a celibate hooker. Â For some reason I donâ€™t ever feel the urge to ride anywhere in Austin like I did in Albany. Â Of course, I was situated in prime biking real estate back in New York. Â Friends, bars, and unsavory Price Chopper parking lots were all a short ride away. Â I live in North-East Austin though, which is about as happening a place as my bedroom. Â If I wanted to ride my bike down a fucking thruway I suppose I could hit up downtown proper, which is apparently a whole bag full of awesome for any bicycle enthusiast. Â Or, you know, I could take a leisurely ride down the street I live on and enjoy the campus of Dell Headquarters. Â I think thereâ€™s a cement factory after that.

Those mirrors however, are great for scribbling nonsensical poetry and/or physics equations on at three in the morning. Â I bought a set of multicolored dry erase markers just for this. Â Sometimes I get bored of that though and start tracing body parts on it instead… at least those that will fit (barely veiled big dick joke taken care of).

It may be apparent at this point that Iâ€™m trying to be obscene simply for the sake of it. Â Iâ€™m going to blame television for this, despite the fact that I donâ€™t own one. Â Iâ€™ve started thinking that everybody has the sort of obscene thoughts as the ones Iâ€™ve written, if not worse, and maybe it is of some comfort to see them written down. Â This probably isnâ€™t true, and is only a projection of my own character flaws. Â I think it would help if these perversions existed to obfuscate some underlying point, but unfortunately I havenâ€™t found much point to anything lately. Â The smut I have written is simply that. Â Itâ€™s a page full of profanity and crudity constructed in a vain attempt to elicit a laugh. Â While I used to choose my words carefully, and on occasion created a meaningful sentence that resonated with sincerity, they seem now to fall upon the page with little regard for any sort of substance. Â Itâ€™s hard to write anything genuine when you stare into life and see nothing staring back. Â Maybe Pete is right after all. Â Thereâ€™s this possum (or opossum, I can never remember which is the American one) that lives in the brush somewhere near my apartment. Â When I sit on my porch and drink late into the night, he often makes an appearance. Â He usually sits on the lawn, stares into the distance, and busies himself with absolutely nothing. Â He seems to exist without any clue as to why he is, but I get a sense of smugness from him, and profound happiness. Â I often look at him and hope heâ€™ll reveal something to me – tell me something Iâ€™ve been missing this past year or so. Â Maybe he has some great knowledge hidden away somewhere. Â But then I remember heâ€™s just a possum. Â He eats trash. Â So, I go and trace my hand on my mirror.