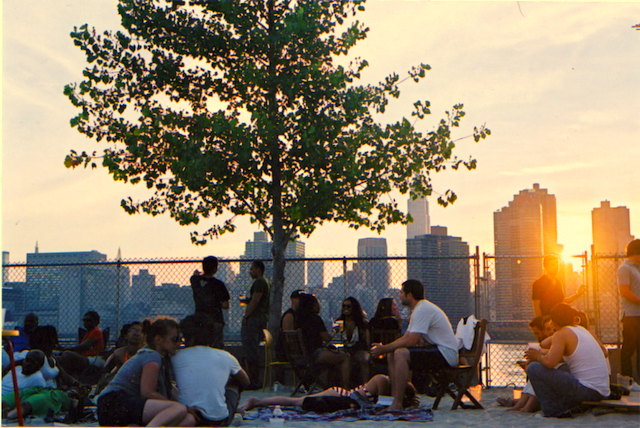 If you find someone you like I highly suggest you ignore that person as best you can.Â  It’ll make this easier.

Think of all the ways you could die.Â  Decide on the the worst one.Â  Then think how much worse it would be if when it happened you were inâ€¦.

Poughkeepsie.Â  That’s how far I got before my road trip to my new and exciting life had become a long and boring car ride through the depths of hell a.k.a Pennsylvania. The fog and blinding headlights of oncoming traffic took their toll and my head began to throb.Â  When I finally stopped at a Denny’s in Virginia and watched the sun rise over a strip mall it was quite possibly the most beautiful thing I had ever witnessed.Â  But to be honest, I could have stepped out of my car and seen two cats blowing each other and I would have been just as happy.Â  Also, Pennsylvanian roads are constantly under construction.Â  I think when they get to the end of one they just start back at the beginning again.Â  Big fucking mystery.Â  Been losing sleep over it.

I think we all reach our Poughkeepsie at some point.Â  And this is where I’m supposed to say something inspiringly lame like you need to keep driving and wait for the sunrise.Â  Well the sun rose over a Denny’s.Â  It was about as poetic as passing a kidney stone.Â  It’s just that I was so delirious from sleep deprivation I practically became the double rainbow guy.Â  Fuck double rainbow guy.Â  And fuck rainbows for that matter too.Â  The refractive index of a raindrop does not impress me.

So how do you leave Albany?

I suppose the first step is to realize that there’s something better somewhere else.Â  That’s certainly easy enough but the rest gets considerably harder and it helps if you start warping your vision of the world.Â  Take everything you see and view it through the lens of apathy, depression, or if you’re a real sick puppy, optimism.Â  I say this because the first two leave a whispered possibility of being better than you had anticipated.Â  Optimism or hope or whatever positive outlook you manage to twist your aspirations through will just end in sad realization.Â  It is best if you just embrace being unhappy and decide maybe it’d be interesting to be unhappy somewhere else.Â  There are so many people and things not to like there’s no reason to limit yourself to one place.

Also, make sure you realize the reason you’re unhappy and want to leave isn’t because you live in a shitty place but because you are in fact a shitty person.Â  People love to say Albany sucks.Â  Well, chances are, you suck.Â  You’re probably not a very interesting person and there’s a fair possibility everybody thinks you’re frightfully unattractive.Â  Don’t leave because you think you’re better than the place you’re leaving or better than the people who live there.Â  You are very likely not.Â  You are statistically mediocre in every way and only a small handful of people will truly miss you when you’re gone.

So, now that you’ve gotten yourself in the right mind set, it’s time to pack your bags.Â  If you need instructions or help with this I highly recommend you shoot yourself in the face.Â  I will give some advice though: everything needs to fit into the trunk and backseat of your car (you do have a car right?), if you own more than two trash bags worth of clothes and shoes I hate you, don’t bring any furniture or anything large and completely unnecessary like a three foot framed picture of your ugly ass dog, and if you’re going someplace hot please remember vinyl records can easily melt.Â  Lastly, before you pack your car, toss a fat man in the passenger seat.Â  Do this because, either like me you brought a fat man with you on your trip, or because I figure that’s how much spare room you’re going to want for all the cases of Red Bull and Hostess cupcakes you’re going to consume on your journey.Â  Be careful with the energy drinks and cupcakes by the way, if you drink three of those things and pound four cupcakes in a one hour period, you will shit out your soul at the next rest stop.Â  You might also want the room for picking up hookers, serial killer drifters, or possibly but unlikely, a nice boy/girl you meet on your way.

Give yourself a month to announce your departure, quit your job, and say your goodbyes.Â  Get everything sorted out sooner rather than later so you can spend your last week without the worries of traveling.Â  Don’t try and see everybody.Â  Most of your so called friends aren’t worth it.Â  Focus on the few people you actually care about and leave the rest to show up at your going away party at a crappy Albany bar of your choosing.Â  Most won’t show and you shouldn’t care.Â  If you do then maybe you’re not ready to leave yet.Â  Try and have sex with everybody you have been wanting to have sex with.Â  The going away forever thing seems to be an effective ammunition for gettin’ laid.Â  Have sex with someone regrettable while you’re at it too.Â  Give yourself one last thing to be happy to see fade away in your rearview mirror.

Hopefully you’ve settled on somewhere to go at this point and you’re not just running off to get raped or killed in the moonlight of an unfamiliar city.Â  I recommend giving Seattle a shot.Â  People tell me it’s great and it has a high suicide rate.Â  Get in your car and leave at night.Â  There’s something calming about driving away in the dark.

You have started again, but when you arrive at your new home and gaze upon its buildings and its people, remember, everything ends.Â  If you’re lucky you’ll be somewhere nice when it does.